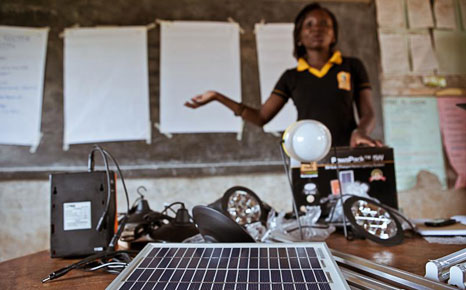 A pilot project will turn Ghanaian mothers into engineers and entrepreneurs by teaching them how to produce small, cheap and low-tech solar power devices to be sold locally.

In the first phase of the project charities and NGOs will play a part in helping women learn how to produce solar-powered mobile phone chargers and some prototypes for other solar-powered devices.

Social Venture Africa, together with the NGO Village Exchange Ghana and the charity Know Your Planet will organise a two-week workshop in January 2014 to train an initial group of 8 women in Ho, the Volta Regional capital in the east of the country.

SVAfrica says it “believes that the key for development and life-quality improvement is to create local opportunities that are economically sustainable rather than simply provide devices free of charge.”

Latest figures from the World Bank showed that around 60-65% of the population of Ghana had access to the electricity grid as of 2010, most of which live in cities leaving rural communities lagging behind.

For Africa as a whole, the International Energy Agency reports that only 25% of the rural population is on the electricity grid, the lowest compared to all other developing regions.

Allowing women in rural areas access to energy is viewed as an increasingly important goal by the UN and development agencies.

In many communities women play a critical role in running the house, collecting water and buying kerosene, placing them in a vital position to drive change in towns and villages.

They are also likely to be the worst affected from extreme weather events, having to care for vulnerable children and older members of the family.

The Solar Sister enterprise, set up in Uganda in 2009, is developing a network of solar women entrepreneurs across the country.

According to the UN, Solar Sister has created micro-businesses for 171 Solar Sister entrepreneurs in Uganda, Rwanda and South Sudan, bringing the benefits of solar power to more than 31,000 people.

Additionally, the charity’s figures show the kerosene fumes inhaled by 780 million women and children are the equivalent of smoking two packs of cigarettes a day.

The lights can cost as little as $10, pay for themselves after 12 weeks and last for five years.

SolarAid does not offer a particular focus on women, but Richard Turner, director of fundraising and marketing, speaking to RTCC said women benefit from solar power more than men.

“Something so simple has multiple impacts in many ways,” said Turner.

One example is the benefits to health workers and midwives who are forced to use mobile phones or kerosene lamps to provide light during deliveries.

The time and effort it takes to collect kerosene from a local market is eradicated with a solar lamp, providing more time for schooling.

“With solar lights, not only is there more time, but potentially it frees up a lot more of disposable income and the feedback we get is that families use that to buy better food, maybe better inputs into agriculture or schooling for their children. So it seems to have a big family benefit,” said Turner.

“I guess the other thing we’re learning is the challenge of how people can afford these systems – what we’re trying to do now is focusing the campaign around harvest time in Kenya because that’s when families should have more a little bit more cash to have the confidence to make the purchase to buy a light.”

Next week will see the international community taking a particular interest in how women can be empowered to mitigate the impacts of climate change.

“We are bringing women leaders together at this crucial time in history because we know that women are uniquely positioned to implement the critical sustainability solutions needed to address the world’s pressing climate challenges,” said Osprey Orielle Lake, co-founder of the International Women’s Earth and Climate Summit.

“Nature will not wait while politicians debate. Women around the world are facing the impacts of a changing climate every day, and we are coming together to say “enough is enough” and it is time for action that addresses the roots of this crisis and fosters just solutions.”