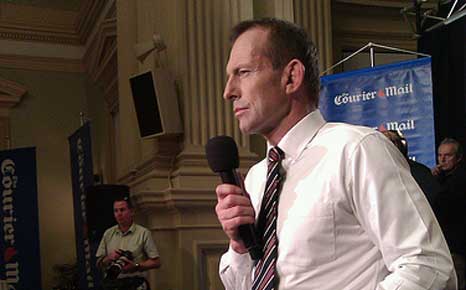 Australia: Tony Abbott’s new Cabinet will be the first in six years to not have a ministerial role for climate change issues, merging instead global warming with the wider environment portfolio. Tony Abbott appointed Greg Hunt, the Liberal-National Coalition’s spokesman on climate change issues since 2009, as the new Minister for the Environment. (Point Carbon)

Australia: Tony Abbott’s front bench team will not have a science minister – instead, science will come under the industry minister’s portfolio. This doesn’t bode well for climate change says Graham Redfearn (Guardian)

Research: The uncertainties of climate change science have become a major focus of media coverage on the subject, a new study shows. About eight in 10 stories on climate change and related scientific research contain some discussion of uncertainties and risk, according to a report from Oxford University. Roughly eight in 10 also refer in some way to the disasters that are likely to result from unchecked global warming and greenhouse gas emission rises. (Guardian)

Russia: Two Greenpeace International activists have been arrested after climbing a Gazprom oil platform from their icebreaker, the Arctic Sunrise, in the Russian Arctic, during a peaceful protest that resulted in a total of 11 warning shots fired across the ship. The Russian Coast Guard threatened to fire at the ship itself if it did not leave the area immediately. (Greenpeace)

Nigeria: The Minister of Agriculture and Rural Development, Dr. Akinwunmi Adesina, yesterday said Nigeria’s economy ran the risk of losing between $100 billion to $460 billion to climate change by 2020. (All Africa)

Research: Car manufacturers appear to be taking advantage of loopholes in EU emissions cap legislation by presenting artificially low carbon emissions to consumers. Carbon emissions produced under laboratory conditions were found to be lower than those released during driving under conventional conditions, said a report by the Brussels-based International Council on Clean Transportation. (RTCC)

Research: Natural gas producers can drastically cut methane leaks from fracking if they invest in high quality methane capture equipment, says a new study which looked at 190 fracking sites across the US and found two-thirds had equipment in place that reduced methane emissions by 99%. (RTCC)

Research: Global land and sea temperatures for August 2013 were the fourth highest since records began in 1880, the US National Oceanic and Atmospheric Administration reports. (RTCC)

Denmark: The city of Copenhagen has won the Carbon Measurement and Planning category in a new Leadership Prize Award as a result of its comprehensive and targeted carbon reduction master plan, the CPH 2025 Climate Plan. Copenhagen aims to become the first carbon neutral capital city by 2025. (Copenhagen Capacity)