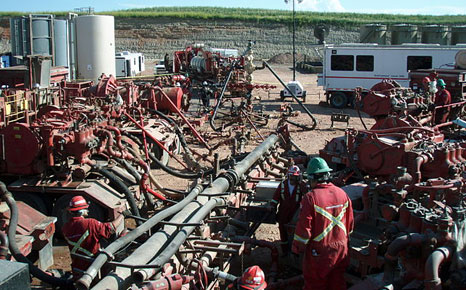 Shale gas currently accounts for 30% of US natural gas production with this percentage projected to grow to more than 50% by 2040.

The study from the University of Texas at Austin, looked at 190 fracking sites across the US and found two-thirds had equipment in place that reduced methane emissions by 99%.

Because of this equipment, methane emissions produced from the construction of the well to transporting the gas are 97% lower this year compared to 2011 national emission estimates, released by the Environmental Protection Agency (EPA).

However, the sites without methane capture measures are said to release 30% to several times higher than current EPA estimates of methane.

Emissions from pneumatics and equipment leaks account for about 40% of estimated national emissions of methane from natural gas production.

Pneumatic devices, which are designed to release small amounts of methane in normal operation, were found to have emissions that were on average 70% higher than estimates in the EPA national inventory.

“This study tackles one of the most hotly debated issues in environmental science and policy today,” said Mark Brownstein, associate vice president and chief counsel of the US Climate and Energy Program, Environmental Defense Fund (EDF).

“It shows that when producers use practices to capture or control emissions, such as green completions, methane can be dramatically reduced. The study also demonstrated, however, that certain methane emissions are larger than previously thought, indicating that there are many further opportunities to reduce emissions.”