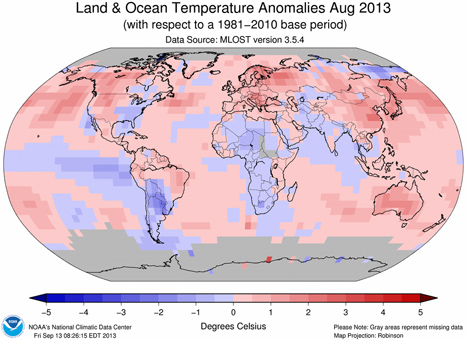 Global land and sea temperatures for August 2013 were the fourth highest since records began in 1880, the US National Oceanic and Atmospheric Administration reports.

NOAA says August was also the 342nd consecutive month with a global temperature above the 20th century average.

Record temperatures were also recorded in part of the Barents Sea, sections of the western Pacific Ocean, and part of the south central Indian Ocean.

The Administration also says than January-August this year is currently the sixth warmest on record.

Next week the UN will release its eagerly anticipated fifth IPCC assessment report (AR5) on the state of the global climate.

It is expected to warn that sea level rise is accelerating, the rate of Arctc sea ice is doubling and the world’s oceans are acidifying due to their absorption of carbon dioxide.

It is also expected to offer reasons for the decreased rate of warming over the past 15 years.

Increasing evidence suggests that the heat may be being transferred into the oceans by changing natural processes.