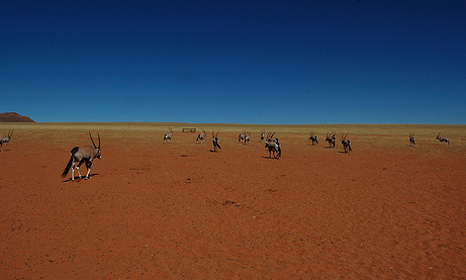 The head of the UN’s desertification convention wants a global agreement on controlling land degradation to be signed off by 2015.

An economic assessment published by the UN in April revealed 12 million hectares of land are transformed into man made deserts on an annual basis, with associated costs of US$490 billion a year.

Speaking ahead of a two week summit in Windhoek, Namibia, the head of the UN Convention to Combat Desertification (UNCCD) Luc Gnacadja said countries needed to accept the urgency of the situation.

“This is going to be critical if the world is going to face the challenge of feeding nine billion people and even more by 2050,” he told RTCC.

“We need to preserve the resource base of food production, and if we are to feed a thirsty world, where there is a need for more water, we need to avoid land degradation, which is the driver of loss of surface water.”

Desertification now affects 168 countries to varying degrees across the planet.

In China, more than 400 million people are suffering from soil erosion and a collapse of ecosystems, with an economic impact of US$10 billion.

Another study in Ghana cited by the UN warns that the country’s agricultural GDP will fall by US$ 4.2 billion by 2015 due to a loss of fertile land.

A 2011 assessment by the UN’s Food and Agriculture Organisation (FAO) said that 25% of land around the world is now classed as ‘degraded’.

A variety of causes are attributed to desertification, including climate change, poor land management, the destruction of forests and overgrazing of livestock.

Growing population levels are set to place added stress on food supplies, which the FAO says will have to increase by 70% on 2007 levels to cope with 9.1 billion people in 2050.

Gnacadja hopes the meeting in Windhoek, involving ministers, scientists and NGOs, will lay the foundations for a global deal on ‘Zero Net Land Degradation’ in 2015, the same year an international climate change agreement is expected to be signed off.

Governments agreed to this in principle at last year’s Rio+20 summit, but he says it is now time to start discussing how this can be achieved.

“I really hope we will sustain and enhance the momentum we have had around land and soil issues,” he said.

Raising awareness or enthusiasm for the issue is a major challenge for the UN, which has seen its funding cut by parties over the past year, together with a contentious decision by Canada to leave the process.

Developing countries are worst affected by the problem, but land management is not a priority for governments focused on economic growth or overseas aid agencies in the way health, education and access to water are.

Jonathan Davies runs the IUCN’s Global Drylands Initiative, and he says this attitude is storing up problems for the future.

“It’s one of those issues that is not easy to popularise. Land and soil are not issues that really capture people’s imagination, but the land is something we all rely on for food, water, clean air and also managing natural disasters.”

Instead of restoring degraded land, many farmers and governments focus on opening up virgin forest or rangelands for agriculture.

The loss of trees and other root plants undermines the stability of the soil, affects its capacity to hold water and can also reduce an ecosystem’s ability to recover from drought.

“Countries are ignoring the consequences of long term degradation in pursuit of short term food security, but these are often not viable in the long term, and in some cases don’t even add up in the short term,” he says.

Once physical, chemical and biological properties of soils begin to deteriorate, their natural recovery rate plummets.

On the flip side, the costs of regeneration rise substantially, which in turn can lead to forced migration, public unrest, or conflicts over natural resources.

An enduring frustration for many scientists and policymakers is that solutions are relatively simple and accessible.

The rehabilitation of Jordan’s rangelands and success of agroforestry in Niger are two commonly cited examples of successful attempts to reverse degradation.

“Quite a lot of degradation comes from farming practices considered to be the best option economically but actually are not – not even in the short term,” says Davies.

Lindsay Stringer, Director of the Sustainability Research Institute at the University of Leeds, says a bigger problem is our lack of understanding why advice is often ignored.

“It’s easy to say plough across the slopes rather than down the slopes or leave fields fallow, but people don’t. And we need to understand why that is,” she said. “It’s more the human behaviour and farmer decision making side of things that we don’t understand.”

Rather than another set of targets, she wants to see the UN outline a trajectory for how it can address degradation in the coming decades, with an added focus on providing local communities with solutions.

Namibia’s ongoing drought may concentrate minds in Windhoek over the next fortnight.

UNICEF say the country’s longest dry spell in 30 years now affects almost 778,000 people. Scientists say it is too early to say whether the drought is a result of climate change.

Luc Gnacadja says it should be a warning for others on what happens if countries fail to take drought and land degradation seriously.

“Namibia has not been hiding behind the challenges it is facing. The point here is that Namibia does have drought policies, but it has not been mainstreamed and activated to deal with the risk of drought.”