Europe’s offshore wind installed capacity at the end of 2012 was just under 5GW with another 4.46GW under construction 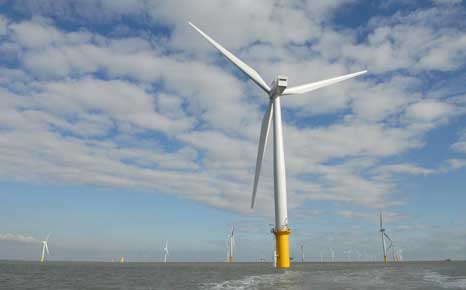 A new extension to the Gunfleet Sands wind farm near the coast of Essex will see the first demonstration in UK waters of two giant 6MW wind turbines.

The 219m high Siemens turbines, which are operated by DONG Energy, stand taller than London’s iconic Gherkin skyscraper, and are said to be more cost-effective and efficient than previous models.

With the completion of the Gunfleet Sands, the UK has now installed more than 1GW of offshore wind power, which provides 2.3 million homes with energy.

“The Coalition is driving huge new investment to deliver both affordable bills and cleaner energy for consumers. This includes an important role for offshore wind.”

The government says £29 billion of investment in renewables has been pledged by the private sector since 2010. This has the potential to support around 30,000 jobs across the country.

Investment by the government includes £20 million from the Regional Growth Fund to improve the competitiveness of the UK wind industry’s supply chain, and £46 million for the Offshore Renewable Energy Catapult over five years to promote links between industry and research centres.

With a budget of up to £15 million, this scheme aims to help companies to test and demonstrate devices and to develop component technologies that can cut the costs of offshore wind energy in the run up to 2020 and in the subsequent decade.

Although offshore wind is not currently thought to be the lead contender for providing the bulk of low carbon supply required by 2030, a robust policy would increase the likelihood that necessary cost reductions are achieved said a report by independent think-tank Carbon Connect released last week.

The European Wind Energy Association (EWEA) has estimated costs coming down between 32% and 39% as improved technology reduces upfront investment and operation and maintenance costs.

Deep Water: The Next Step for Offshore Wind Energy from the EWEA reported that Europe’s offshore wind installed capacity at the end of last year was just under 5GW, with another 4.46GW under construction and approximately 18GW approved.

Such development would “meet the EU’s electricity consumption four times over,” the report pointed out, and “as deep offshore capacity increases, expertise, skills and technologies developed in Europe can be exported across the globe, initially to Japan and the US.”