Peru’s cloud forests could be wiped out by 2100 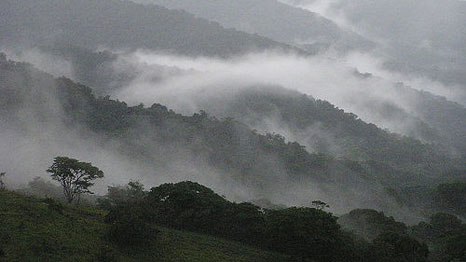 Peru’s cloud forests could face near extinction as their fragile ecology means they are ill equipped to deal with the changing climate.

The forests, home to a third of Peru’s mammal, bird and frog species, are highly sensitive to changes in the temperature.

Scientists say those species could lose between 53-96% of their populations.

This is the conclusion of a study by researchers at Wake Forest University, North Carolina, who published their findings this week in PLoS ONE.

The habitats of most of the plants in the Andes – and therefore of the animals that live off them – are determined largely by temperature.

But the steep terrain means that temperature can change rapidly on the mountains’ slopes, and therefore the majority of tree and plant varieties can only live in an area extending a few hundred metres.

“I could be standing among a group of one tree species and throw a rock completely across their ranges,” says David Lutz, the paper’s lead author.

Cloud forest seedlings have so far coped with the problem by sprouting at higher elevations. But the rapid levels of projected change over the course of the century means that the plants will have to migrate faster than ever before.

This means they need to be at around 3,000 feet by 2100 if they are to remain in equilibrium with the climate if it continues to warm at its current rate.

The problem is, the grasslands at the highest elevations on the mountains act as a barrier, preventing the trees from moving further upslope.

The transition between trees and grassland, called an ecotone, has so far been stationery over most of the landscape, even where temperature changes mean that it should have moved 200m higher.

“Previous work we’ve done shows that the trees in the forest are migrating upwards, but this work shows the ecotone isn’t,” says Miles Silman, professor of Biology at Wake Forest University. “The ecotone presents a wall to species migration.”

While conservationists conventionally stay away from an interventionist approach, a hands on approach may be required if the cloud forests are to remain into the next century, says Lutz.

“Intervention is a strategy conservationists seldom use in this ecosystem but it may be the only way to save it,” he says.

“Our next step is working with local, and international conservationists to come up a plan to help cloud forests keep moving upslope.”