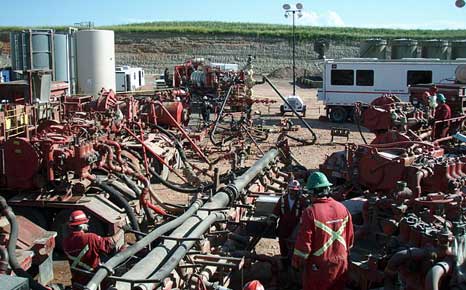 US: California has passed the US’s toughest fracking regulation on Wednesday. Gov. Jerry Brown is expected to sign the bill, which had widespread support from environmental groups, though some withdrew their endorsement at the last minute. (LA Times)

China: The state council of China said it will reduce coal consumption, close steel plants and control the number of cars on its roads in an effort to “gradually eliminate” heavily polluted days in as soon as a decade. (Bloomberg)

Research: Australian Research Council Future Fellow at the University of Canberra has said extreme weather and rising sea levels caused by climate change will significantly increase the need for an effective defence force. Maps of places where climate change might act as a “threat multiplier” – food and water shortages in eastern parts of Asia and forced migration across Africa were shown to military officials. (ABC)

Mexico: On Wednesday Mexico’s parliament began discussions on a fiscal reform proposed by President Enrique Pena Nieto that would impose a tax on carbon emissions from fossil fuel use. (Point Carbon)

Arctic: The volume of sea ice in the Arctic hit a new low this past winter, according to observations from the European Space Agency’s (Esa) Cryosat mission. (BBC)

France: Environment Minister Philippe Martin will introduce a carbon levy on fuel as the government tries to use the tax system to cut emissions he said yesterday. The government will ensure the overall tax burden on fuel stays at current levels next year, he said, giving no details of how the new levy will work. (Bloomberg)

Arctic: Gas flaring by the oil industry contributes to carbon pollution in the Arctic more than previously thought, potentially speeding up the melting of polar sea ice. (RTCC)

Report: Fifty companies account for nearly three quarters of the carbon emissions of the world’s top 500 firms, according to new research. The report, produced by PwC and CDP, reveals greenhouse gas emissions in the world’s top energy, utility and materials firms grew by 1.65% in the past four years. (RTCC)

Europe: Proposals for an energy and climate policy framework up to 2030 by the end of the year, European Commission president José Manuel Barroso told MEPs yesterday. (RTCC)

UK: The UN’s climate science body has rejected claims in the Mail on Sunday newspaper that it plans to hold a crisis meeting to discuss the impending release of its latest major report. (RTCC)

Europe: Members of the European Parliament have voted to limit the amount of biofuels that can be derived from food-based crops to 6%. The EU wants 10% of transport fuel to be comprised of biofuel by 2020, as part of efforts to cut carbon emissions. (RTCC)

Research: Scientists say the varied influence of climate change on temperature and precipitation may have an equally wide-ranging effect on the mosquito-borne spread of West Nile virus, which can infect both humans and horses. (Horse Talk)

Australia: Adelaide has created the world’s first 100% solar-powered electric bus available free of charge. The car receives electric power from solar panels located on the city’s central bus station allowing it to run freely from the city centre and the North Adelaide, and will also offer air conditioning and WiFi to its 40 passengers. (CleanTechnica)