Gas flaring responsible for 42% of black carbon in the Arctic

Gas flaring in the Arctic, along with household stoves, contribute more to warming Arctic than previously thought 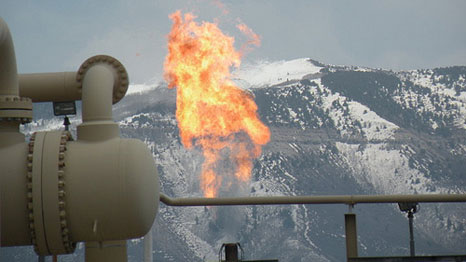 Gas flaring by the oil industry contributes to carbon pollution in the Arctic more than previously thought, potentially speeding up the melting of polar sea ice.

Researchers found that the flaring of the gas produced by oil extraction in the Arctic accounts for 42% of the black carbon, or soot, that is contributing to the relatively fast rate of warming on the region.

The Arctic still contains vast untapped oil reserves that large companies are looking to exploit as the melting sea ice increases their accessibility.

Black carbon is one of the major causes of global warming after carbon dioxide emissions. As it settles on the surface of the snow or ice, it darkens the surface of the Arctic and causes it to melt faster, by absorbing more heat from the air.

The Arctic sea ice is declining faster than climate models predict, hitting new lows in 2012, with concerns that it could be completely ice free as early as 2016.

The study, published in Atmospheric Chemistry and Physics, found that black carbon levels are even higher during certain times of the year, with gas flaring contributing to more than half of the black carbon contributions near the surface of the ice during March.

Globally, gas flaring contributes to only 3% of black carbon emissions.

“We are seeing more and more oil being extracted further and further north. And the proximity of emissions from gas flaring matters,” says Zbigniew Klimont, a researcher from the International Institute for Applied Systems Analysis who worked on the study.

The new research incorporates detailed regional information, improving on previous studies which have only dealt with national averages.

“Understanding how much is emitted when during the year is something that has to be included better in our regional models,” says Kilmont.

A study published in August found that Arctic surface temperature is almost five times more sensitive to black carbon emitted from within the region than to emissions transported in from mid-latitudes, as it is more likely to settle on the surface.