Shale gas must operate in a strong policy framework if it is to bring down emissions, according to government report 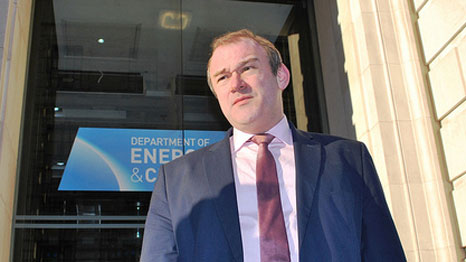 The exploitation of shale gas in the UK is likely to increase greenhouse gas emissions without strong global policies to fight climate change, a UK government report says.

Published today, the  Department of Energy and Climate Change (DECC) study states that drawing on a new source of fossil fuel – in this case, the gas buried in shale rock buried across the UK – could accelerate climate change, since global temperature rises are determined by cumulative emissions over all time, rather than the rate of emissions.

The production of shale gas could add to overall global emissions if the fossil fuels being replaced are used elsewhere.

“The view of the authors is that without global climate policies (of the sort already advocated by the UK) new fossil fuel exploitation is likely to lead to an increase in cumulative GHG emissions and the risk of climate change,” write Prof David MacKay, DECC Chief Scientific Advisor, and Dr Timothy Stone, Senior Advisor to the Secretary of State in the report.

Climate change ought to be the main focus of the debate, said a panel of scientists speaking at The Wellcome Trust today – not the issues of earthquakes and water contamination, which have helped to polarize the debate so far.

Ed Davey, Secretary of State for Energy and Climate Change, emphasised in a speech today at the Royal Society that shale gas exploitation would work within the UK’s legally binding climate targets, and would help the country move to a low carbon economy.

“Gas, as the cleanest fossil fuel, is part of the answer to climate change, as a bridge in our transition to a green future, especially in our move away from coal,” he said.

The DECC report highlights the position of shale gas within the energy mix in the UK, and supports the idea that the emissions of this new source of unconventional gas are inherently lower than liquefied natural gas (LNG) and especially coal.

But it says the government must implement measures to offset or reduce shale gas emissions to ensure that the greenhouse gases emitted do not simply contribute to what it already being produced by existing fossil fuel reserves.

The report recommends three approaches: carbon capture and storage (CCS), negative emissions technologies such as reforestation, and finding means to leave other fossil fuels in the ground that would otherwise have been exploited.

“The UK Government is committed to CCS head, heart and wallet,” he said.

“I am excited by the prospect of Britain leading the world on carbon capture and storage, because cracking this technology and making it cost effective will open up a host of new options in tackling climate change.”

The process of extracting onshore shale gas in the UK has excited widespread protest, centring on Balcombe, where energy company Cuadrilla intended to explore an old oil well, which could have potentially led to fracking.

Last week, Cuadrilla was forced to withdraw its planning application at Balcombe, because it did not cover the extent of the work that they intended to undertake at the site, leading to further concerns that the regulatory framework in the UK would not support responsible fracking practice.

Speaking alongside Ed Davey today, Doug Parr, chief scientist at Greenpeace, spoke out against continued reliance on fossil fuels. He said, “It is entirely unclear to me how digging up more gas helps. This is the reality of what living in a 2C world actually means.

“Someone has got to make that move. We’re talking about the UK – we’re a country that I hope is still dedicated to low carbon power, so if we aren’t going to take that step, who is?

“That’s the reality of where we are with climate change. We’ve got to stop finding and exploiting fossil fuel reserves.”