Mongolian Steppe munched into desert by goats and sheep 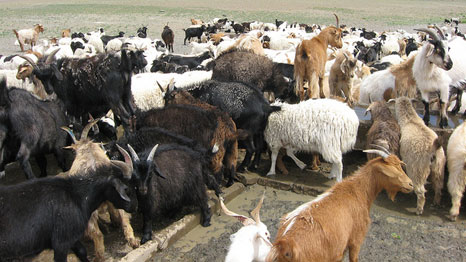 Growing populations of sheep and goats has led to serious degradation of the Mongolian Steppe (Pic: Oregon State University)

Hungry goats are the latest threat to climate, say scientists studying the cause of degraded land in the Mongolian Steppe.

According to researchers at Oregon State University, overgrazing by millions of sheep and goats has caused about 80% of the vegetation loss that has occurred in the area over recent years.

Reduced precipitation as a result of climate change accounts for the rest. The findings were published today in Global Change Biology.

In terms of total volume, this makes up quite a meal for the roaming animals – in a country twice the size of Texas, which consists of 79% grassland, about 12% of biomass has completely disappeared, while 70% of grassland is now considered degraded.

This has led to desertification, as the Gobi Desert in the south rapidly spreads across the country, not only damaging the ecosystem, but also contributing to global climate change.

Grasslands can either act as a significant carbon sink or a source for atmospheric carbon dioxide.

“This is a pretty serious issue,” said Thomas Hilker, an assistant professor in the OSU College of Forestry.

“Regionally, this is a huge area in which the land is being degraded and the food supply for local people is being reduced.

“Globally, however, all ecosystems have a distinct function in world climate,” he said. “Vegetation cools the landscape and plays an important role for the water and carbon balance, including greenhouse gases.”

Livestock numbers have almost doubled to 45 million animals since 1990 in Mongolia, partly due to the socioeconomic changes linked to the breakup of the former Soviet Union, said the report, when high unemployment caused a return to domestic herding.