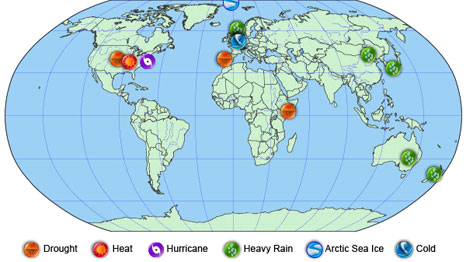 Location and type of events analyzed in the Paper (pic: NOAA)

Many of the extreme weather events that took place in 2012 were directly linked to changes in the earth’s climate, a new report has found.

The study, undertaken by 18 different research teams from around the world, found that some of the severe storms and floods, including Hurricane Sandy, could be scientifically attributed to rising temperatures and sea levels, which occur due to greenhouse gases being released into the atmosphere.

Published by Bulletin of the American Meteorological Society, the paper suggests that climate change was directly responsible for events such as the shrinking of the Arctic sea ice, the extreme heat of the US summer, and the massive storm surges of Hurricane Sandy.

While these events could have happened anyway, the rising global temperatures influences the magnitude and frequency of these events.

For instance, increases in sea level have nearly doubled the probably of flooding on a Hurricane Sandy scale compared to 2050, the scientists say, while approximately 35% of the blistering US summer heat between March and May 2012 can be attributed to human-induced climate change.

Other events, such as the droughts across the US, eastern Kenya and Somalia, floods in northern China and heavy rain in southwestern Japan could not be directly attributed to global warming trends, and probably reflect natural variability in the weather.

Co-lead author Thomas Peterson, principal scientist at NOAA’s National Climatic Data Center, said, “Scientists around the world assessed a wide variety of potential contributing factors to these major extreme events that, in many cases, had large impacts on society.

“Understanding the range of influences on extreme events helps us to better understand how and why extremes are changing.”

The researchers have created a more nuanced picture of the role that climate change plays in triggering extreme weather events by conducting thousands of runs of computer simulations, which examine the cause of 12 extreme events that occurred on five continents and in the Arctic during 2012.

The models looked at various factors, including moisture in the air, atmospheric flow, and sea temperature and level.

This represents something of a sea change in current thinking on climate science. Scientists have so far been reluctant to attribute one particular weather event to rising temperatures, but improved modelling means that now they are able to confidently quantify the likelihood of climate change causing the event.