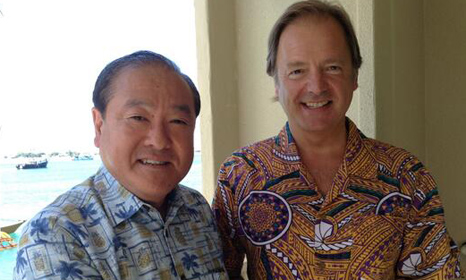 Swire joined 13 Pacific Island leaders and ministers from New Zealand, Japan, Australia and the USA for the Majuro Declaration

The Pacific Islands are the farthest landmass on Earth from the UK. We are separated by some 10,000 miles of land and sea, and by a full twelve hours of daylight.

But ever since the travels of early British seafarers in the eighteenth and nineteenth centuries, we have developed a deep and enduring relationship.

Many of the islands remain close friends and allies in the Commonwealth today, and share the democratic values that are the bedrock of that organisation. Many have fought alongside us to protect these values, and even today a contingent from Tonga serves with British troops in Afghanistan.

There is a rich royal connection, stretching from the ground-breaking journey to England in 1783 of the young Prince Lee Boo of Palau – who to this day lies buried in St Mary’s Church, Rotherhithe – to the hugely successful visit last year of the Duke and Duchess of Cambridge to Tuvalu.

And our commercial relationship remains strong. It began with energetic trading of sandalwood and copra – subject of a Robert Louis Stevenson novella – and continues today, with significant amounts of our imported sugar coming from the region.

I was privileged enough to visit three of the Pacific countries earlier this year. Experiencing them makes it obvious why they have held a place in the British imagination for so many years: their breathtaking beauty; the astonishing biodiversity which has inspired naturalists all over the world; and the warmth and generosity of the islanders themselves.

But the relationship today has an urgency about it. This week, the Marshall Islands will host the 44th Pacific Island Forum, and I will be there to represent the UK as a Dialogue Partner. The key theme will be tackling climate change.

Shifting weather patterns and rising sea levels present grave threats to Pacific Island countries. From coastal flooding and erosion, to food and resource security, to the contamination of water supplies– these impacts are being felt now. Some of the islands have already seen populations displaced internally by rising sea levels.

The UK shares with the Pacific an understanding of the immediacy of the climate challenge. Pacific countries have been vocal in their call for tougher action internationally. We too are seized of the need to respond quickly and decisively.

The UK is working hard to achieve an ambitious and legally binding global deal in which all countries commit to reducing their emissions. This deal needs to be signed under the UN banner in Paris in 2015. Our task now, in collaboration with partners in the Pacific and other vulnerable countries, is to generate the international momentum necessary to deliver the deal, starting with the next round of negotiations in Warsaw this November.

Of course, we recognise the need to take action ourselves. That is why we were the first country in the world to pass legislation setting a legally binding target for emissions, committing us to an 80% reduction by 2050.

Internationally, we are one of the largest providers of climate finance, pledging just under £3.9 billion over the 2011 – 2016 period to help developing countries deal with the realities of climate change, reduce their emissions and exploit new opportunities to develop cleaner energy. In the last five years, we have spent £60 million in the Pacific region alone on climate related activity.

It is vital that we build a strong and effective coalition with all those who understand its dangers. The Pacific islanders, old friends on the front line of climate change, are important allies in this.

Hugo Swire is a Minister of State at the UK Foreign Office. Follow him on Twitter @HugoSwire