Scientists say biggest driver for fires in USA is temperatures, indicating country will have to face more wildfires in future 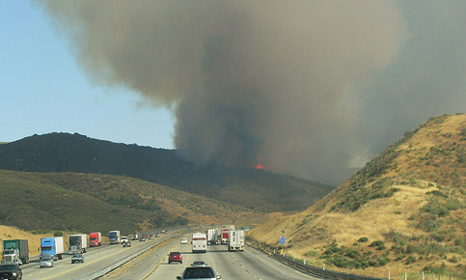 As fire crews battle to control the forest fires that have been devastating areas of the western US, a bleak warning has been issued that such fires in future are likely to break out over longer periods and wider areas each year, and create up to twice as much smoke.

Forest wildfires are a regular event in California and other states in the western US, but this year’s conflagrations are being described as some of the worst on record.

One fire, which has threatened California’s Yosemite National Park, was at one stage spread over nearly 200,000 acres, or more than 300 square miles.

Environmental scientists at Harvard School of Engineering and Applied Sciences (SEAS) fed data into a number of models to come up with predictions about how such fires will behave in future.

The data included not only historical records of fires but also seasonal temperatures, relative humidity levels, and amounts of brush and dry fuel on the forest floor over six “ecoregions” in the western states.

The models were matched with data from the fourth Intergovernmental Panel on Climate Change (IPCC) report on possible future atmospheric and climatological conditions for the year 2050.

Based on this multi-model approach, the Harvard team was then able to calculate the likely extent of fires in mid-century, and to gauge areas that would be burned.

“We weren’t altogether certain what we would find when we started this project,” says Loretta J Mickley, the study’s co-author and a senior research fellow in atmospheric chemistry at Harvard SEAS.

“In the future, we expect warmer temperatures, which are conducive to fires, but it’s not apparent what the rainfall and relative humidity will do. Warmer air can hold more water vapour, for instance, but what does this mean for fires?

“It turns out that, for the western US, the biggest driver for fires in the future is temperature, and that result appears robust across models. When you get a large temperature increase over time, as we are seeing, and little rainfall, fires will increase in size.”

Among the study’s forecasts for fires in the western US in 2050 are:

– Areas burned in the month of August could increase by 65% in the Pacific Northwest, nearly double in the Eastern Rocky mountains, and quadruple in the Rocky Mountains Forest region.

– Probability of large fires could increase by factors of two or three.

– The start dates of the “fire season” could be earlier (late April instead of mid-May) and the end date could be later (mid-October instead of early October).

During the last 40 years, air quality has improved considerably over much of the US, mainly due to government efforts on regulating emissions. However, the study predicts that, due to more fires, smoke levels could increase by between 20% and 100% by 2050.

“I think what people need to realise is that embedded in those curves showing the tiny temperature increases year after year are more extreme events that can be quite serious,” Mickley  says.  “It doesn’t bode well.”