Chinese capital is to restrict cars on roads to 6 million by 2017, in an attempt to curtail smog which stifles city 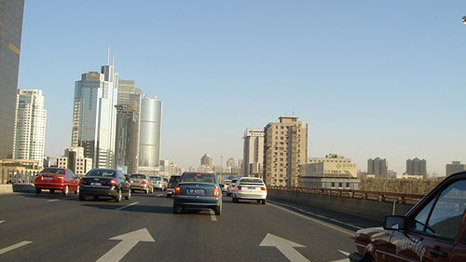 The municipal government in Beijing has announced a plan to restrict the number of cars on the roads, in an attempt to control the levels of smog and pollution that engulf the city.

Transport officials announced that, as part of a new five-year clean air action plan, the number of cars would be limited to 6 million by 2017. At the end this July, Beijing had 5.35m cars on its roads.

The new restrictions would come into force in 2014, and would build on limitations already in place; currently, new vehicles registered in the city are capped at 240,000.

Other measures proposed to reduce air pollution include the promotion of new energy vehicles, which would reduce the intensity of vehicle use.

The government hopes that this will reduce total fuel consumption by 5% or more compared with 2012 levels, despite the overall increase in vehicles on the road.

There are also plans to add more than 480km of bus lanes and to introduce a public bike rental scheme by 2017, so that 60% of Beijing vehicle trips were being made by public transport each year.

Reducing air pollution is increasingly becoming a priority for the Chinese government, as the population becomes ever more dissatisfied with with environmental degradation associated with economic growth.

When smog descended on Beijing earlier this year, even The People’s Daily – the state-sponsored newspaper – ran an editorial demanding urgent action on pollution.

Zhao Chuan, an environmental journalist at Beijing-based publication 21st Century Business Herald, says this policy will be welcomed by residents tired of dealing with dangerous levels of fumes, but points out that the city’s population of 20 million means it may not be enough.

“Obviously, to some extent this is a good way to deal with the emissions from the cars, which have been recognised as one of the main reasons causing the heavy smog,” he told RTCC.

“Additionally, if the government really want to deal with the smog, they need change the energy consumption system.”

China Director of NGO the Climate Group Changhua Wu says the measures are a step forward compared to anything taken before, but that any changes were likely to be incremental rather than dramatic.

“Transportation is definitely one of the local pollution sources that we need to address very quickly, so I wouldn’t say the plan was too ambitious, but I definitely think it’s a very positive step forward,” she told RTCC.

“If you look at the landscape and the structure of the city, it’s designed in an urban sprawl. The number of vehicles on the streets is outrageously high, and Beijing has already been taking very drastic steps in building up the public transportation system.

“But early on the city was built in a way that made it difficult to control the number of vehicles. That’s why it’s stuck.”

The plan is part of a wider action plan by the government to cut the density of PM 2.5 – airborne particles measuring less than 2.5 microns in diameter which pose risks to health – by 25% by 2017 to around 60 micrograms per cubic metre. Earlier in the summer, this pollutant reached the extremely toxic level of 382.

A recent report from the Chinese Academy of Sciences suggested that vehicles were one of the primary sources of PM 2.5, contributing to 22.2% of the particles in the city.

Beijing is one of the seven cities that will implement a pilot carbon trading mechanism, after the first credits went live in Shenzhen in August. China’s renewables sector is expected to attract investment of $1.4 trillion by 2030, according to economists at Bloomberg New Energy Finance, eroding coal’s dominant share of the market.

According to Wu, however, it will take more than the proposed measures for Beijing to revert to the bicycle friendly city that it once was, since the current levels of pollution mean that taking to your bicycle as a regular means of transport is in itself a death wish.

“Concerns about the air quality mean you’re literally killing yourself if you ride a bicycle every day to work,” says Wu. “So it won’t change that dramatically at all – people wouldn’t really choose to ride a bicycle.”

The plan was announced one day before a visit to the city by the Chinese Vice Premier Zhang Gaoli. While on an inspection of air pollution prevention and treatment in the Chinese capital, the vice premier said that Beijing should prioritise environmental protection in order to alleviate its air pollution problems.