Solar investment surged 73% to $16 billion in 2012, but country now needs to develop a flexible electricity grid 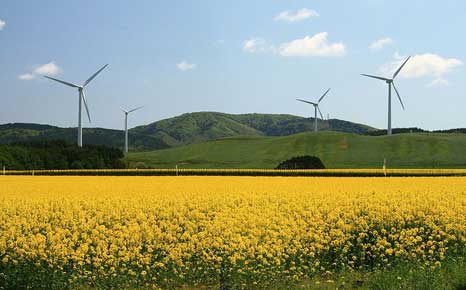 Japan’s investment in renewable energy in response to the Fukushima nuclear disaster could send its electricity grid into meltdown according to analysts at Bloomberg New Energy Finance (BNEF).

In 2012 the country say investment in solar surged 73% to $16 billion, thanks to a boom in small-scale PV on the back of new feed-in tariff subsidies for  installations.

This has not been matched by improvements to transmission and storage lines, and BNEF say Japanese utility companies Chugoku Electric Power and Kyushu Electric Power now have less than 1GW of available grid capacity for solar or wind projects.

Since an incentive program started in July 2012 the Ministry of Economy, Trade and Industry says Japan has approved 22.4 gigawatts of renewable energy capacity.

“In the long term, IHS stills sees Japan as one of the leading solar markets, due to its high incentive level. In calendar year 2014, we forecast Japan’s PV market to grow from 5.9GW to 6.5GW, up by 10%.”

He added: “Once the grid connection becomes an issue, the development of PV systems may slow down. I forecast in April, saying 2013/2014 [would be a] peak year for development of mega-solar projects (with system size greater than 2MW) in Japan.”

At least 70% of Japan’s terrain is rugged and mountainous making land for buildings and large-scale renewable projects precious.

Despite these concerns, Japan continues to be the most active solar photovoltaic (PV) market this year due to generous government incentive schemes.

The government announced it had approved 21,090MW of clean energy projects in 2012, keeping it on track to install more than 5GW of solar this year.

Panasonic announced last week that it is targeting rooftops for its solar panels. The company has already sold 540MW of solar products in the 2012 fiscal year and now wants to increase the volume by 25% this year, according to Bloomberg.

Reform of the power market could improve the country’s grid, BNEF said in the report. Such a bill is expected to be submitted to parliament in the autumn.

The Japanese Ministry of Economy, Trade and Industry is making some attempts at accommodating renewables having announced in July it had selected Hokkaido Electric Power, Sumitomo Electric Industries and Tohoku Electric Power as successful applicants to carry out the construction of the world’s largest energy storage system.