Could humans cause another Paleocene-Eocene Thermal Maximum?

The Paleocene-Eocene Thermal Maximum lasted 200,000 years and temperatures soared by at least 5° and perhaps 9°C 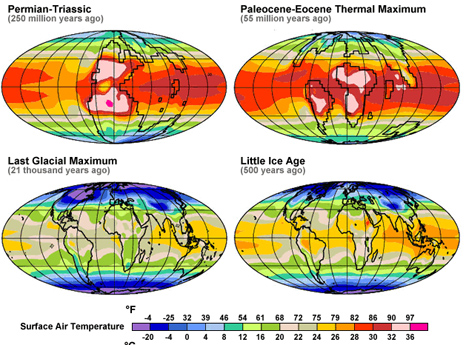 There was no Arctic ice. The coral reefs had all but perished. There were no reef fish and the seabed was paved with the remains of foraminifera, a tiny shellfish.

The ocean food web was dominated by minute picoplankton rather than the more substantial diatoms that are the basis of life today: these were creatures just too small to nourish the fish that would then become prey for today’s sharks, tuna, whales, seals and even seabirds.

The message is that cold is good for big creatures. The trade winds around 50 million years ago were feeble, the oceans were poorly ventilated, with huge zones in which oxygen was sparse or non-existent, and sea levels were high.

Then 56 million years ago came a crisis called the Paleocene-Eocene Thermal Maximum: it lasted 200,000 years and temperatures – already high – soared by at least 5° and perhaps 9°C. Ecosystems were disrupted, but extinctions were few: the sea’s animals managed by moving north or south.

Richard Norris of Scripps Institution of Oceanography at the University of California San Diego and colleagues want to use the Eocene 50 million years ago as a model for future possibilities.

They point out in the journal Science that carbon dioxide levels passed the 400 parts per million mark in May 2013 and that if the world carries on burning fossil fuels at the present rate, then the conditions of the greenhouse world of 50 million years ago could be here in just 80 years.

And their message is: what happened once before could happen again.

The seabed could become a disposal ground for featureless rubble, the acidification of the oceans could eliminate the coral reefs and leave the continental shelves smeared instead with red clay, and the food web on land and sea could start to alter.

The lesson of the Paleocene-Eocene Thermal Maximum is that major ecological changes could endure a very long time.

A millennium of change?

Paradoxically, the approaching greenhouse world will not be because of an arbitrary change in planetary conditions, as it was last time; it will be a consequence of advanced industrial human society.

The scale of this consequence, however, will be quite disproportionate. Small bands of humans roamed the planet as scavengers and hunter-gatherers for 250,000 years in an “icehouse” world.

They invented agriculture only 10,000 years ago, and started using fossil fuels in systematic ways only 200 years ago: the past 200 years, however, seem set to make a world of difference to the blue planet.

If greenhouse emissions are dramatically curtailed, then the oceans will still change, but the period of change may last only a thousand years or so, say the authors. If emissions continue to increase, then the consequences could be very long-lasting.

“Although the future ocean will begin to resemble the past greenhouse world, it will retain elements of the present “icehouse” world long into the future”, Norris and colleagues warn.

“Changing temperatures and ocean acidification, together with rising sea level and shifts in ocean productivity, will keep marine ecosystems in a state of continuous change for 100,000 years.”