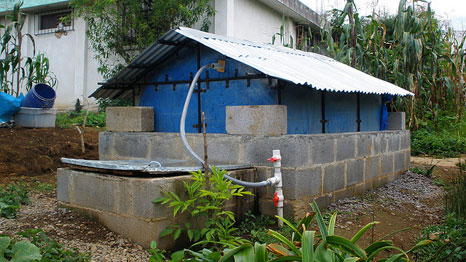 Biodigesters can be used to convert waste into a clean source of energy (pic: flickr / AIDG)

A hospital in the Philippines is using human placenta to generate clean energy to power the building and cook their food.

A biodigester has been constructed at the Perpetual Succor Hospital, in the centre of Cebu City in the Philippines, which generates methane gas from the waste produced by the hospital, including garden and food waste and placenta.

The waste is broken down within the biodigester, and the gas produced can then be measured, collected, and used to power the hospital in a sustainable and efficient way.

Since February, the hospital has been harvesting the methane for cooking, and there are plans to start using it to power the laundry rooms.

The project is part of a campaign, coordinated by the group Health Care Without Harm and funded by the Global Environment Facility, to create a global network of ‘green and healthy hospitals‘. Their efforts are supported by the United Nations Development Programme.

Sonia Astudillo, a spokesperson for Health Care Without Harm, told RTCC, “Hospitals, with all their state-of-the-art equipment while providing quality health care to the patient, are also using up a lot of energy. Lights and machines are running 24/7.

“If we do not do something about this, we will be using more energy as more state-of-the-art technologies are introduced to hospitals. Climate footprint of the hospital will continue to increase. And with climate change, more and more people will get sick.

“With more sick people, more will be sent to the hospital. It is a never-ending cycle.”

The technology is the first biodigester to be used for biomedical purposes in the Philippines – and one of the first in the world.

The idea, part of an ongoing scheme to make the hospital more sustainable, was initially suggested by Jared Escarpe, a 23-year-old who started working at the hospital housekeeping department in 2010.

Escarpe had arrived in the city from a small Filipino community, SitioTac-an, where agriculture was a major source of income.

Biodigesters were used to generate methane gas for cooking from crop leavings and poultry waste, a concept that he decided could work equally well in the environs of a hospital.

Despite having no formal engineering qualifications, Escarpe built a mini-digester to demonstrate the technology to the hospital administrators and the Health Care Waste Management Committee.

The hospital agreed to build two biodigester reservoirs, costing approximately US$5,950, which started generating gas at full capacity six months after they were constructed.

As well as producing a sustainable source of energy, this solution also overcame another problem: how to safely dispose of placenta. Before the biodigester was installed, the waste was collected by the city sanitation department, a potentially unsafe practice.

“Given the location of Perpetual Succor Hospital, which is in the middle of a metropolis, they do not have much space for composting and a space for pit,” says Astudillo.

With biodigestion, the process is much safer, with the placenta being treated and then transported into the system for shredding.

This is one in a long list of schemes that the hospital has undertaken to improve environmental efficiency.

For instance, the air conditioning in the hospital meant that hot air was pumped into the chapel. To create a fresher atmosphere, a “green wall” was created by planting climbing plants on the empty walls outside the chapel until they covered the entire area.

The green wall experiment was then repeated, with the construction of an indoor walkway garden just outside the main wards. This reduced the hospital’s use of electricity, as the cooler air meant there was less need for electricity.

A vegetable garden has been planted on the roof of the hospital, where crops such as sweet potatoes and pak choi are grown organically and then fed to the patients.

“We know that there are lots of hospitals out there who are doing amazing work in greening the health care and they may not even be aware of it. We want them to come forward and to inspire other hospitals,” says Astudillo.