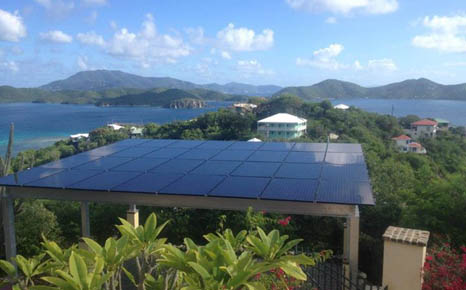 The largest solar installation in the Caribbean is finally under construction in the West Indies’ Leeward Islands, after overcoming a series of  bureaucratic obstacles.

The 600kW installation is expected to span eight different buildings and various businesses, including supermarkets, which have a high refrigeration load due to the extreme temperatures in the region.

Chris Mason owner of installation company Comet Solar told RTCC: “We are on the cutting edge of progress towards the adoption of renewable energy sources in the Caribbean but progress is difficult as entrenched interests are being obstructive to the passing of favourable legislation.”

The Caribbean has some of the highest electricity rates in the world, according to market analysts at ClearSky Advisors.

Oil in the Caribbean, which comprises 30 territories, accounts for as much as 100% of electricity supply in some areas. As a result, a significant portion of export earnings, as high as 50% in some countries, is spent on oil imports.

Although less than 10MW of solar PV has been installed in the Caribbean to date, ClearSky expects nearly 500MW of PV to be installed by 2016.

Comet Solar, along with project partner and module manufacturer Canadian Solar have installations in other parts of the Caribbean, but Mason expressed concerns about the market.

He said: “This project is our largest to date, with the challenge of having a remote location, a range of building types from steel buildings to concrete roofs and a mix of British and American electrical systems and voltages.”