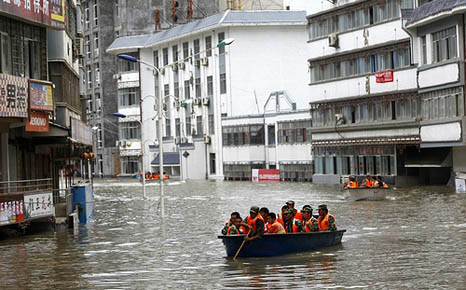 In recent months, the world has seen some significant loss and damage from climate related events.

These have included losses of nearly US$100 billion in the US from Hurricane Sandy in the northwest coast and droughts in the south and mid-west, to over 10 billion from floods in Germany and many other parts of the world.

In northern China floods have caused loss of several hundred lives, and entire towns have been washed away.

When these events occur in developed countries the losses tend to be large in monetary terms but low in human lives lost.

When they occur in poorer developing countries the numbers of human lives and livelihoods lost are generally larger than the monetary loss and damage.

Nevertheless, both developed as well as developing countries are being affected quite severely.

Several recent scientific publications, including the special report on climate extremes of the Intergovernmental Panel on Climate Change (IPCC) as well as a World Bank report (called Turn Down the Heat), have shown that the severity of such climatic events in future is likely to increase dramatically due to human induced climate change.

A more recent study looking at potential loss and damage in coastal cities around the world estimated that in New Orleans and New York alone the costs may go up to US$1 trillion over this century.

While every country has some national level mechanism in place to assess loss and damage and sometimes also provide compensation (either through private insurance or public purse), they are becoming strained, with insurance companies no longer willing to provide insurance against floods and droughts in many developed countries.

In some cases, where the country is unable to cope by itself, the international community steps in to provide funding. Although such funds are not called compensation, they are, nevertheless, given because of the sense of shared responsibilities between rich and poor countries.

In the last Conference of Parties of the United Nations Framework Convention on Climate Change (UNFCCC) held in Doha, Qatar, last December, the parties agreed for the first time to look at options for a global mechanism to address loss and damage from climate change.

The developing countries, led by the small island developing states (SIDS) and least developed countries (LDCs), have been arguing for some time for an international mechanism on loss and damage , which has been resisted by the rich countries (largely out of fear that it will give rise to demands for compensation based on liability).

However, it is time that the developed countries realised that loss and damage will not be confined to poor countries only but that even the rich countries will suffer major loss and damage if temperatures continue to rise. Hence, it is their own interests to engage constructively with the poorer more vulnerable countries in trying to address this topic.

Thus, at the next conference of parties (COP19) to be held in Warsaw, Poland, in November this year, they should bring a positive response to the demand for an international mechanism on loss and damage and support the vulnerable countries in this demand.

One area for mutually beneficial exchange of knowledge and information between developed and developing countries is research on loss and damage.

A good example of this has recently been set by the government of Japan, which has allocated nearly US$1 million for a research programme on loss and damage in the Asia Pacific region. Other developed countries could follow Japan’s example.

It is high time to move from a confrontational approach to a cooperative approach on loss and damage.

The writer is Director, International Centre for Climate Change and Development, Independent University, Bangladesh, Dhaka. This article first appeared on the Bangladesh newspaper The Daily Star.