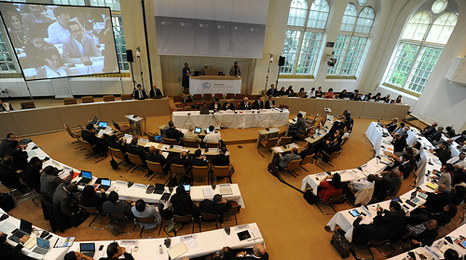 A strategy to deliver US$100 billion of climate finance by 2020 appears no closer after two inconclusive days of UN-sponsored talks in Bonn.

The ‘experts meeting’ on scaling up funding for mitigation and adaptation in developing countries was not expected to herald any new spending commitments, but it appears progress towards determining targets or scaling up contributions has stalled.

“No-one really understands what this commitment [of US$100 billion] means, because the conditions around it are so fudged, and this is being used as an excuse for not moving forward.”

This week’s gathering was the latest in the series organised by the UN to thrash out ways of generating flows of long term funding for climate projects in the developing world.

Developed countries provided around US$30 billion between 2010-2012, but subsequent contributions have been limited.

The UK says it can deliver US$6 billion until 2015, while Denmark, Germany the EU and USA have also made pledges, but analysts say these fall short of what is required.

Amal-Lee Amin from environmental thinktank E3G says discussions in Bonn were “substantive”, but told RTCC there is a need to start talking about delivery of funds.

“I think developed countries have to get real and despite their budget constraints there needs to be a much stronger recognition that they have to move in this direction,” she said. “If they are not able to finance it out of their national budgets they need to be looking at other sources.”

In a presentation in Bonn Robert Douglas, head of international climate change at the UK Treasury stressed the “significant pressure” developed country budgets now face in what he termed a “resource strained world”.

He said that for governments to offer long term guarantees on funding from public sources, they require certainty on value for money and “clear commensurate increased benefits”.

Nick Robins, head of climate change at HSBC, admits progress on the US$100 billion is currently stuck in a “holding pattern”, but says private sector interest in the low carbon sector could see that change.

Robins is an advisor to the Climate Bonds Initiative, which is pushing the role green bonds can play in driving investment into clean energy.

“I think we’re at the beginning of the next up-wave of climate concern,” he told RTCC.

“If you look at how equity markets are looking at clean tech, you’ve come out of the trough of concerns over policy weakness and over-capacity. Equity markets have seen through that and recovered interest in green bonds”.

Kowalzig agrees that the private sector will play a huge role, but stresses the need for countries to agree some ground rules and limits for climate finance.

There is still confusion over whether overseas development aid should be counted as climate finance, if funding should be given as loans or grants, and what the role of specific climate funds are.

The UN’s Green Climate Fund may solve some of these dilemmas when it opens for business in 2014, but its power and influence will also depend on how much money it is provided with.

This year’s main UN climate meeting in the Polish capital was billed by some as the ‘finance summit’, but those hopes appear to be fading fast.

Robins hopes there will be “more high level political inquiry” at a meeting in Incheon, South Korea in September which will wrap up this series of long term finance talks.

“One of the things developing countries would like to see is more clarity and commitment there,” he said. “From a confidence point of view it would be useful to see what public finance commitments other countries can make in Warsaw and beyond.”

Countries have steered clear of any guarantees during negotiations this year, leading some observers to brand finance the ‘elephant in the room’ that needs to be addressed.

In response to a lack of assurances, some developing countries are pushing hard for a loss and damage or climate compensation mechanism. With flooding linked to rising sea levels, projected to cost over a trillion a year by 2050, this could prompt richer nations to take action.

Despite a pep-talk from UN climate chief Christiana Figueres in Bonn this week, Kowalzig believes it’s unlikely there will be further progress in 2013, suggesting that more work needs to be done on understanding what the US$100 billion target really means.

“We will not get these pathways in Warsaw, it’s too late and there is no mandate,” he said.

E3G’s Amin suggests a clearer idea of how the 2020 target will be met is over a year away, but says political engagement in Warsaw will be important to ensure momentum is maintained.

“It’s pretty clear there will be no agreement on pathways at the next meeting, but there could be a broad acknowledgement that the process needs to conclude next year,” she said.

“I think a lot of people are talking up the Ban Ki Moon summit [New York, September 2014] where they could be made.”