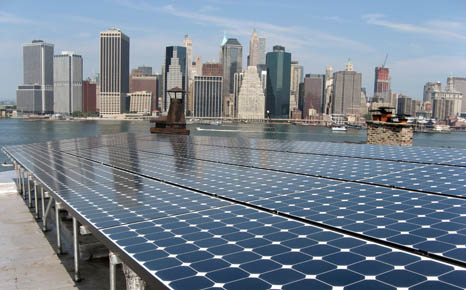 MIT researchers have engineered a new rechargeable low-cost battery that has the potential to foster widespread use of renewable energy, such as solar and wind power.

The device relies on a phenomenon called ‘laminar flow‘ to store and releases energy.

“This has as much promise as anything else being explored for storage, if not more. Contrary to previous opinions that membraneless systems are purely academic, this system could potentially have a large practical impact,” said Cullen Buie, an assistant professor of mechanical engineering at MIT.

The palm-sized prototype generates three times as much power per square centimeter as other membraneless systems.

This represents a power density that is higher than many lithium-ion batteries and other commercial and experimental energy-storage systems.

“Until you can make [energy storage] reliable and affordable, it doesn’t matter how cheap and efficient you can make wind and solar, because our grid can’t handle the intermittency of those renewable technologies.”

The market for residential solar photovoltaic energy storage systems is expected to boom in the coming years, according to market analysts at IHS Electronics, with cumulative installations amounting to 2.5GW by 2017, equivalent to the solar power that could be generated by more than 600,000 homes.

Countries like Japan, who is investing US$299.5 million for battery projects and Germany who launched its energy storage incentive in May are leading the pack.

To date, renewable energy has been unreliable but with cheap energy-storage technologies, electricity could be stored and then distributed via the grid at times of peak power demand.

In experiments, William Braff, a graduate student in mechanical engineering and his colleagues operated the flow battery at room temperature over a range of flow rates and reactant concentrations. They found that the battery produced a maximum power density of 0.795 watts of stored energy per square centimeter.

“We have a design tool now that gives us confidence that as we try to scale up this system, we can make rational decisions about what the optimal system dimensions should be,” Martin Bazant, a professor of chemical engineering said. “We believe we can break records of power density with more engineering guided by the model.”

According to preliminary projections, Braff and his colleagues estimate that the battery may produce energy costing as little as US$100 per kilowatt-hour – a goal that the US Department of Energy has estimated would be economically attractive to utility companies.

“You can do so much to make the grid more efficient if you can get to a cost point like that,” Braff said. “Most systems are easily an order of magnitude higher, and no one’s ever built anything at that price.”