Ship denied entry to the Northern Sea Route by the Russian authorities, but campaigners say they could still proceed 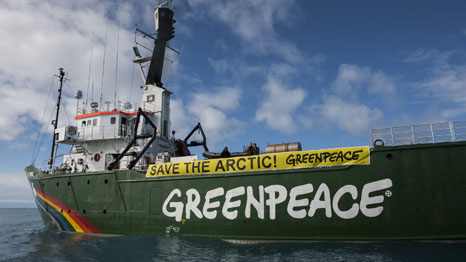 Greenpeace will consider sailing down the Northern Sea Route to protest oil exploration this Friday, defying the Russian authorities who have refused them access to the area.

Activists from Greenpeace International have applied to the Russian authorities on three occasions for a permit to enter the Northern Sea Route, and have been rejected each time.

The reason, say the Russians, is the lack of suitability of the vessel for operating in heavy ice conditions, despite the fact that the sea in the area is ice free at this time of year.

The ship of campaigners hopes to confront and expose the offshore activities of Russian oil company Rosneft and their American partner ExxonMobil, who plan to start drilling next year.

The increasingly busy shipping route runs along the Siberian coast from Murmansk on the Barents Sea to the Bering Strait and Far East.

Despite the ban, Christy Ferguson, a Greenpeace campaigner who is currently on board The Arctic Sunrise, says that she and the crew will consider setting sail for the Kara Sea this Friday as planned.

“We are here to bear witness, we’re here to expose and confront what’s happening, and if we’re not granted permission for reasons we think are invalid and unjustified then we will certainly consider going forward,” she told RTCC.

So far, the ship has been crossing the Barents Sea, which does not require the permission of the authorities, but if it is to pass into the Kara Sea as planned, then a permit is required.

Christy added: “We don’t know exactly what the consequences will be because as far as we know no vessel has ever entered the northern sea route without permission before, but we believe that what we’re doing is essential, it’s important for the future of the planet, the future of the local region and the future of the global climate.”

The ship is currently continuing on its planned journey towards the Northern Sea Route, and the crew are still in hope that, with the added pressure of international scrutiny, the Russian authorities will accept a fourth application filed by Greenpeace to enter the region.

Greenpeace, which operates a global campaign to protect the Arctic against dangerous drilling, hopes that their current action on board The Arctic Sunrise will force oil companies to take greater accountability for their actions in the remote Russian sea.

Specifically, they hope to document the offshore activities of Russian oil company Rosneft and its US partner ExxonMobil, who are preparing to begin drilling operations in the Kera Sea next year.

A spokesperson for Greenpeace Nordic says that the migration of western oil companies into the Russian Arctic means that the badly regulated region is becoming particularly vulnerable.

He told RTCC, “What has happened in the Arctic is some of the companies have put the operations on hold due to Shell’s failure last year.

“Some of the companies are stating they are putting their plans on hold due to regulatory uncertainties, and what we’re seeing now as a consequence of that is some of these western companies, with cooperation with the Russian oil companies are heading into the Russian Arctic where regulation is not as strict as in Alaska, for example.”

According to the Russian Federal Service for the Supervision of Natural Resources Usage, Rosneft is the worst polluter in terms of oil spills on the land where it operates in northern central Russia. In 2011, it was responsible for 75% of spills in the region. Greenpeace are concerned that such carelessness would be extended to their offshore operations, where there are not the facilities to either stop or clean up a spill.

Christy said: “Companies believe that they can operate in remote places like the Russian arctic away from scrutiny and away from high standards of accountability, and part of what we’re doing is simply insisting on being there, seeing what’s happening first hand and exposing it worldwide. It seems that Russian authorities don’t want us to do that.”

Greenpeace say that Russia’s refusal to let them into the Northern Sea Route is an indicative of the lack of transparency surrounding drilling in the Russian Sea.

“Part of being accountable is being transparent, being open about what you’re doing, and allowing it to be assessed and be criticised, if criticism is warranted,” Christy said.

“If there’s nothing wrong with what’s happening in Russian waters then there should be no problem with a group like Greenpeace going to see it and document it.”

There is, she said, no reason why The Arctic Sunrise should not be permitted in the Russian waters. In 2009, the ship spent many months documenting the effects of climate change off the coast of Greenland and in the Arctic sea ice.

“Our vessel is an icebreaker and it has operated in Arctic conditions before. We have, for example, an ice pilot on board with us, because we’re committed to following the requirements in the permit process. Our ice pilot is here to advise the pilot about navigating ice, but there is no ice.”

But according to Olga Dobrovidova, a Moscow-based environmental journalist for RIA Novosti, it could also be indicative of a Russian penchant for bureaucracy when it comes to shipping regulations.

She told RTCC, “It’s really possible that the documents that Greenpeace provided were somehow not compliant with the Russian instructions, and all authorities in Russia are known for being very peculiar about the instructions – they want to follow everything to the letter. Basically, they don’t care that it’s Greenpeace – everyone is equal to them.

“But then again, I’m pretty sure that in this case it might be Russia obstructing environmental activism.

“There are stories about environmental activists being harassed and threatened, especially with regards to bigger projects. There’s a duality in this matter, because generally environmental concerns are very much appreciated now in Russia. Some kind of activity is actually encouraged, but only if it’s the good kind of activity.

“When it comes to touchy subjects oil exploration in the Arctic, I think things can be pretty messy and this is the other side of it. It is indicative of the general attitude with regards to Arctic exploration.”