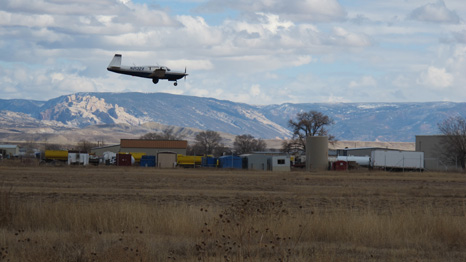 The scientists had to wait for optimum weather conditions before measure the methane (Pic: Sonja Wolter, CIRES/NOAA)

The volume of methane leaking out from oil and gas fields is so high that it could negate the benefits of burning natural gas, researchers have found.

In February last year, scientists from Colorado Boulder University flew an aircraft above the Uintah Basin in Utah, which accounts for about 1% of the US’s natural gas production, following a mass of air as it moved into the region and then flowed out again.

When they looked at their results, they found that the air flowing out of the site consisted of 6-12% more methane than it did when it entered.

This figure is significantly higher than the one suggested by the Environmental Protection Agency, who, in a recent report, suggested that methane leaks made up just 1% of production.

But these previous estimates, the researchers say, depended upon a flawed method of measuring the methane leaks.

“We were very surprised that there was that much methane coming from the area,” said Colm Sweeney, co-author of the study.

He told RTCC, “We went there knowing there were going to be significant emissions, but we didn’t expect that when all was said and done almost 10% of the amount of methane that they’re producing is being leaked from the system.”

According to their report, published this month in Geophysical Research Letters, the lack of reliable and accurate estimates of the amount of gas leaking from production fields existing at the moment is “critical gap in determining the climate impact of the recent increase in US natural gas production”.

It says that “In particular, the methodology used to account for fugitive CH4 [methane] emissions during production is in question.”

According to Sweeney, while the volume of methane being emitted is surprising, it is the use of a new methodology to measure the gas that could prove really important.

The researchers are now repeating the experiment in Denver and Texas, to see if the unexpectedly high amount of methane from Utah is merely an outlier, or whether it is representative of a more deep-rooted flaw in the way in which leakages are measured.

Although the research only takes into account one gas production site on one day, if the results from their improved method of measuring the methane leaks turn out to be replicable across other regions, it could seriously undermine the environmental benefits of burning natural gas in place of gas or oil.

Currently, natural gas is seen as a more efficient energy method of powering the grid. According to statistics from the US Department of Energy, natural gas combustion produces 177% more energy per CO2 molecule formed than coal, and 140% more than oil.

The problem with natural gas is that it is primarily composed of methane, a greenhouse gas that is 25 times more potent than CO2.

A recent study has suggested that if more than 3.2% of natural gas leaks into the atmosphere on its way from the point of extraction to a gas-fired power plant, the electricity produced will have a larger immediate climate impact than that from a coal-fired plant.

The 6-10% figure measured at the Uintah Basin is in excess of this, and could therefore offset the benefits of natural gas over other fossil fuels.

Such findings are likely to be painful for US energy authorities if they turn out to be widely applicable, as the country is currently turning to natural gas as a domestic energy source that is reducing both bills and greenhouse gas emissions.

According to the EPA, greenhouse gas emissions in 2011 were 6.9% below 2005 levels, which is partly attributed to the growth of the natural gas industry. Sweeney says that further application of their methodology would be necessary to get the EPA to adjust their emissions estimates.

The Uintah Basin is an old gas field that is currently undergoing a revival due to shale reserves that are now accessible through fracking.

Sweeney says that the methodology they used cannot specifically attribute the escaped methane to any particular part of the production process.