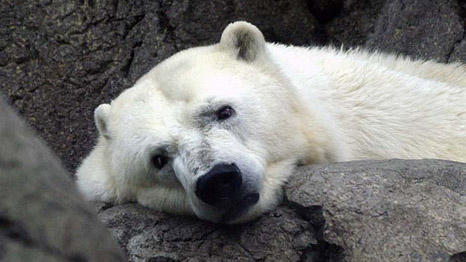 A giant polar bear will stroll through London next month to raise awareness of drilling in the Arctic.

The giant art installation is the size of a double decker bus and goes by the name of Aurora. Operated by 15 puppeteers, she will take to the streets on 15 September, the time of the year when the sea ice melts to its yearly minimum.

The bear has been inspired by steampunk art, and is currently being constructed in a workshop by Royal Opera House prop makers.

The event is being run by Greenpeace as part of a larger global action called Ice Ride, where campaigners from around the world are being encouraged to dress up as the Arctic and take part in a mass cycle ride. There are currently 70 rides planned across 31 countries.

“It’s going to be lots of fun, but also with a serious message. We’re going to be taking our protest to those oil companies that want to drill in the Arctic although it’s melting,” Sophie Allain, Polar Campaigner at Greenpeace, told RTCC.

Greenpeace campaigns heavily on the Arctic. Last year, the sea ice reached a record low. Some of the more alarming estimates suggest that the Arctic could be entirely ice free by 2015, while the more conservative reports suggest that this is likely to have happened by around 2054.

Aurora will make her appearance just before the first part of the IPCC report is published, which will round up the climate science of the last five years.

This will not be the first time this summer that London will have witnessed their more adventurous stunts: last month, six women gained widespread attention when they scaled the Shard to try to dissuade Shell from exploiting the Arctic for its oil reserves.