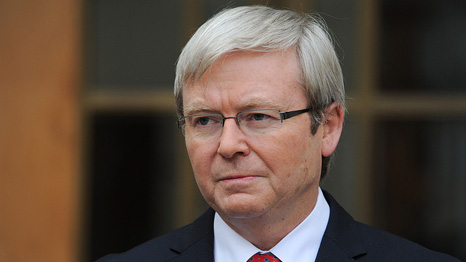 The two leaders answered questions about their commitment to Australia’s international target of cutting emissions by 5% by 2020, and whether they would go further than this if the international negotiations demanded it.

Neither demonstrated enthusiasm for increasing their 5% target without serious commitments from the rest of the world, but both pledged to adopt schemes that would reduce carbon emissions.

“We’ve always said if circumstances change we will adjust appropriately, but there is no way that other countries are embracing the kind of carbon tax and emissions trading scheme that Australia has,” Tony Abbott, the leader of the Coalition Opposition party said.

“If anything, the trend is all the other way, and if you look at what has happened in this country of ours, our emissions intensity has reduced some 50% over two decades because companies have tried to make sensible savings in their energy usage.”

The current Prime Minister Kevin Rudd reasserted that climate change was central to Australia’s future, and highlighted that recent research has shown that the country will face more extreme weather events as climate change intensifies.

While he affirmed that Australia has “no alternative but to act collaboratively”, he said that his decision to go beyond the 5% target would be “a careful judgement based on what the rest of the world does”.

Rudd’s provocation that the Labour party has “never doubted the science – unlike some” refers to Abbott’s past comments expressing climate scepticism.

John Connor from the Sydney-based Climate Institute told RTCC that he believed that Tony Abbott’s reinforcement of his view on the science of climate change was an important moment in the debate.

Despite showing a greater commitment than previously to climate targets, he said that he fell short of realistic engagement with international negotiations.

“I think that there’s a kind of wilful blindness that the Coalition is exhibiting in relation to international action, and I think that is maybe because of uncertainty about whether their policies can achieve more than the 5%, or maybe just to avoid talk of international climate action when they may become the first in the world of abolish a carbon market,” he said.

Connor also suggested that, while climate change is taking centre stage in the debate, this is not necessarily due to a growing concern for the climate.

“There’s a paradox here because the carbon tax or emissions trading is very much in the middle of the debate, but it’s more a proxy for cost of living than action on climate change,” he said.