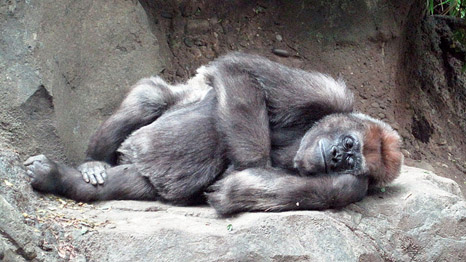 The Virunga National Park is home to some 200 mountain gorillas (pic: flickr, thestitcherati)

The Virunga National Park in the Democratic Republic of Congo (DRC) is under threat from oil exploration.

British oil company Soco International intends to undertake an exploration of the park for oil, in spite of the fact that it is both a National Park and a UNESCO World Heritage Site.

The park is also home to about 200 critically endangered mountain gorillas. According to the DRC Ministry of Environment, it contains “more species of mammals, reptiles and birds than any other protected area in Africa, and possibly the world.”

It also has an important role to play in climate change mitigation, due to its role in generating rainfall. Deforestation would lead to changes in the rain patterns of the region. The loss of natural forests is responsible for 15-20% of manmade greenhouse gas emissions globally.

In 2007, the DRC government granted oil concessions to a handful of companies, covering 85% of the land in the park. Of these, Soco is the only one that announced its intention to explore for oil within the park boundaries.

Last year, another of the companies granted concessions, Dominion Petrolium, transferred its 45.75% interest to Soco, while the French oil company Total agreed to not to prospect for oil in the area in response to calls from UNESCO and the UK government to respect any international conventions relating to the National Park.

The law in the DRC currently prohibits any activities incompatible with the protection of nature, but Soco has managed to gain its authorisation through exploiting the loophole that allows “scientific activities” in protected areas.

To try to convince the government and stakeholders to prevent further oil exploration from going ahead, WWF have released a report which calculates the economic value of the park when maintained as a sustainable resource.

“Our core argument is that the DRC government essentially has a choice,” says George Smeeton, a spokesman for WWF.

He told RTCC, “They could go ahead and allow oil drilling in the park, or the alternative is using the park sustainably, so we tried to put numbers on what value the park has being used as a sustainable resource.”

The report finds that the current value of Virunga is approximately $48.9 million, but that in a more stable situation, the park could increase in value to more than $1.1 billion per year. This value would be made up through factors tourism, fisheries and carbon sequestration.

Smeeton says that the report is important in convincing governments and particularly investors that putting their money into further gas and oil exploration would be a mistake.

Specifically he says it’s vital to explain the “carbon bubble” theory that if the world is going to stay beneath the 2C warming limit, much of the fossil fuel reserves held by companies are essentially impossible to exploit, and therefore massively overvalued.

“If you’re talking about investing in oil and gas exploration in increasingly risky areas like Virunga National Park or in the Arctic, what is driving that is investors who are putting up the money,” he said.

“If the world is serious about tackling climate change, and policies are going to be put in place to try and cut carbon emissions and force a shift in investment away from high carbon fuels to renewables, then actually they’re risking those investments, risking having stranded assets, and risking pumping money into a bubble which is going to deflate rapidly in the not too distant future.”