Climate policy is becoming a fixture on political agendas, including the recognition of climate vulnerability 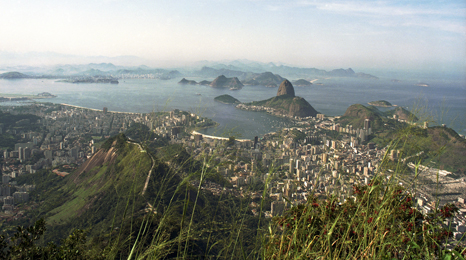 Latin American leaders are building on the Rio+20 earth summit in their search for green growth (Pic: UN)

By Gilberto Arias and Guy Edwards

In a bid to protect future prosperity from serious climate change impacts, Latin American countries are attempting to balance climate action with economic growth, through domestic policy and at the UN climate talks.

Following the Stern Review on the Economics of Climate Change’s principal conclusion that taking action now to reduce emissions is cheaper than dealing with climate impacts later, these countries strongly back an ambitious global regime to avoid these future costs.

The Inter-American Development Bank says these costs could reach US$100 billion annually in the region by 2050, even under a 2˚C average global temperature increase.

Examples from Brazil, Mexico and the Dominican Republic suggest that climate policies do not necessarily undermine economic growth, while an example from Ecuador reveals how climate-related policies run the risk of being sidelined by the need to use natural resources.

Brazil has established a national greenhouse gas reduction target of roughly 36 percent of projected emissions by 2020. Brazil’s greenhouse-gas emissions fell nearly 39%, with a 76% drop in cumulative emissions from deforestation, between 2005 and 2010.

Brazil attributes the dramatic improvements in forestry protection to a raft of policies implemented in 2004. However, research also points out that decreasing prices for agricultural products also led to a reduction in deforestation.

Mexico was the first developing country to create a comprehensive climate change law in 2012 with targets to reduce GHG emissions by 30% by 2020 and 50% by 2050.

The law also states that 35% of energy should come from renewable sources by 2024. Investments in renewable energy in Mexico grew from US$352 million in 2011 to US$1.9 billion in 2012, highlighting the opportunity to combine clean energy and job creation.

The Dominican Republic recently presented a voluntary pledge to reduce 25% of absolute 2010 emissions by 2030. The plan, protected by law, is projected to add 100,000 permanent jobs while expanding the DR’s renewable energy capacity and integrating low-carbon development in the tourism sector.

Climate-related policies can be undermined by the need to use natural resources for economic growth. Ecuador’s Yasuní-ITT Initiative seeks compensation for roughly half the estimated value of certain untapped oil deposits, in order to leave these resources untouched.

The funds are earmarked to protect national parks and promote renewable energy. However, the plan has so far raised less than US$500 million, leading President Correa to announce a re-evaluation of the initiative and its limits on oil extraction.

Latin American countries are fast growing economies with growing middle classes with substantial development and infrastructure goals. They can take advantage of the opportunities and competitive advantages arising in a future carbon constrained world through the early introduction of climate policies for carbon-efficient economies.

The region will be required to almost double its installed power capacity to roughly 600 GW by 2030, yet the Inter-American Development Bank says Latin America can meet its future energy needs through renewable sources including solar and wind, which are sufficient to cover its projected 2050 electricity needs 22 times over.

Investments in sustainable development in the region are increasing, delivering climate-resilient economies while avoiding emissions. This drive has led to the introduction of cross-ministerial policies, but climate policy across the region suffers from weak implementation.

Trade-offs between climate action and economic interests are inevitable, however, these trade-offs appear less significant than the major economic costs associated with climate impacts.

Climate policy is becoming a fixture on Latin American political agendas, including the recognition of vulnerability to climate impacts and that early action on reducing emissions will avoid greater costs later.

Latin American countries are attempting to promote a new narrative that early climate action is compatible with low-carbon, sustainable prosperity. Successful experiences in Latin America can also positively feed into the UN climate change negotiations and help push for higher ambition and strengthen the discourse that climate change action is compatible with economic growth.