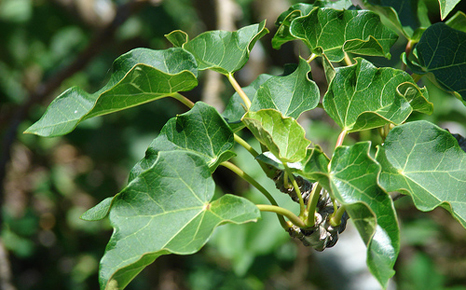 Planting trees on a large scale in arid regions could be used to capture CO2 and mitigate anthropogenic climate change, according to German scientists.

The optimal method for what they call carbon farming is the widespread growing of Jatropha Curcas, a poisonous, semi-evergreen tree, able to reach a height of 6 metres and able to withstand hot, dry conditions.

“We did an experiment in the desert in Egypt in Luxor. We did not have any problems and we are convinced that it will work”, first-author Klaus Becker of the University of Hohenheim in Stuttgart told RTCC.

The team compiled their data from Jatropha Curcas plantations in Egypt, India and Madagascar. This form of natural geoengineering with the Jatropha plant is considered by the team as a cheaper and environmentally safe approach for climate change mitigation.

Fellow researcher Volker Wulfmeyer said: “To our knowledge, this is the first time experts in irrigation, desalination, carbon sequestration, economics and atmospheric sciences have come together to analyse the feasibility of a large-scale plantation to capture carbon dioxide in a comprehensive manner.”

The carbon farming study shows that one hectare of could capture up to 25 tonnes of atmospheric carbon dioxide per year, over a 20-year period.

A plantation taking up only about 3% of the Arabian Desert, for example, could absorb in a couple of decades all the CO2 produced by motor vehicles in Germany over the same period.

With about one billion hectares suitable for carbon farming, the method could sequester a significant portion of the CO2 added to the atmosphere since the industrial revolution.

But there are more advantages. Carbon farming’s price tag ranges from €42 to €63 (US$83) per tonne of CO2, making it competitive with other CO2-reduction techniques such as carbon capture and storage.

Furthermore, the scientists claim that after a few years, the plants would produce bioenergy (in the form of tree trimmings) to support the power production required for the desalination and irrigation systems.

The team hopes the new research will get enough people informed about carbon farming to establish a pilot project. “We strongly recommend more emphasis is put on this technology – at both small and large scales – and that more research is done to investigate its benefits in comparison to other geoengineering approaches,” said Wulfmeyer.

Not everyone is convinced. Lucy Hurn, biofuels campaign manager for the charity Actionaid said jatropha limited the use of land available to people who need marginal land to graze their animals, they are getting food from that area: “we wouldn’t class the land as marginal,” she said.

Hurn pointed out that the jatropha are highly toxic and can pollute the land it is grown on, even in a desert.

Becker says his team are proposing to use land in Egypt, Qatar and Oman that is sparsely populated and will not affect communities.

“The whole coast line along the Arabic sea is not being cultivated because it’s desert – no one plants food there because of the lack of water. We are not competing with any crop land. The jatropha are more resistant and can stand this harsh hot environment.