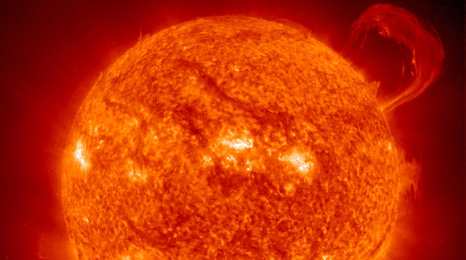 The threat of climate change is now so severe it demands a response similar to the Apollo Moon landings and the Manhattan Project that developed the Nuclear bomb.

That’s the view of the UK’s former chief Scientist Sir David King, who outlined his proposals to “save the planet” in the Financial Times today.

King says G20 countries need to join forces to enable cheap bulk electricity to be produced from solar energy systems around the world.

By 2025 he says one gigawatt (GW) could be supplied to cities in America, Europe and Asia.

“To defeat the axis powers, the allies developed the atom bomb. When threatened in the cold war, the US sent a man to the moon,” King and economist Richard Layard write.

“When threatened by global warming, we surely need a similar effort to save the planet. The Manhattan and Apollo projects engaged the best minds of their ages from a few nations. But today the effort needs to be international.”

The USA and China need to play a central role in any global plan, argue King and Layard, but other G20 nations would be called on to finance the initiative.

“To match the spending on the Apollo project would require only 0.05 per cent of each year’s gross domestic product for 10 years from each G20 country,” they say.

In an interview on the BBC Radio 4 Today Programme (1.39), King explained that falling costs of solar development and installation mean this is the best technology to invest in.

“Since we have just passed 400 parts per million [of carbon dioxide] and most climate scientists believe 450 will leave to potential calamaties, this is a good moment to give an extra push to the development of solar energy,” he said.