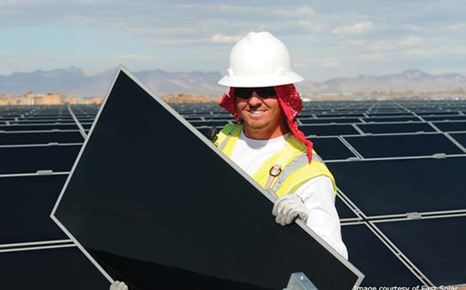 AGL estimates over 450 construction jobs will be created at the two project locations. (Source: First Solar)

The largest solar energy project in the southern hemisphere, costing A$450 million, has been given the go-ahead by the Australian Renewable Energy Agency (ARENA) and the New South Wales government.

On an annual basis, the AGL projects will produce approximately 360,000MW hours of electricity, which will be sufficient to meet the needs of over 50,000 average NSW homes.

AGL will deliver these projects in partnership with ARENA and the NSW Government, together with the local councils and communities of Broken Hill and Nyngan, and project partner First Solar

The AGL solar projects will also facilitate research supported by the Education Investment Fund. The company will collaborate with the University of Queensland and the University of New South Wales, as well as First Solar, to implement original research which will support the future development of solar energy in Australia.

Despite this milestone, market analysts at IHS solar are forecasting a decline in the Australian PV market this year, to around 750MW compared to over 900MW last year.

“We are predicting that the market will resume growth next year but will take a few more years to reach 2012 levels,” Lauren Cook, analyst at IHS, told RTCC.

“The PV market in Australia is mostly made up of residential systems but with the ending of incentives and increasing electricity prices, IHS solar predicts that commercial and utility-scale installations will increase in market share.