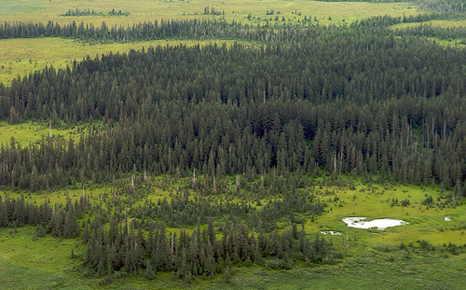 There have always been fires in the cold forests of Alaska. Periods of burning are part of the ecological regime, and fires return to black spruce stands of the Yukon Flats at intervals of tens to hundreds of years.

But recent evidence suggests that fire is about to come back with a vengeance – or, in the language of science, “a transition to a unique regime of unprecedented fire activity”.

Ryan Kelly and Feng Sheng Hu, two biologists at the University of Illinois, Urbana, have examined charcoal records from 14 lakes in Yukon Flats to reconstruct the history of burning for the last 10,000 years.

They and colleagues report in the Proceedings of the National Academy of Sciences that during the Medieval Climate Anomaly – the warm period that brought monastery vineyards to Britain a thousand years ago – the dry conditions favoured what they call “peak biomass burning”.

But this apparent limit has, they report, been surpassed during recent decades, characterised by “exceptionally high fire frequency and biomass burning.”

Their warning came during a week in which, on just one day, the US space agency Nasa published satellite images of burning scrub and forest in the states of California and Idaho, in the Irkutsk region of south-eastern Siberia, and of illegal slash-and-burn fires to clear land in Indonesia.

This last led to unprecedented levels of air pollution in Malaysia and Singapore: schools were closed and aircraft grounded, and the Government of Malaysia issued gas masks.

The fires in the northern forests matter, because the boreal forests cover about a tenth of the planet’s land surface, and they store about 30% of the planet’s terrestrial carbon.

So they are vulnerable to global warming, climate change and wildfire: wetlands, too, are likely to dry up, and permafrost continues to melt, all of which makes the forests more vulnerable. When they burn, the stands of timber release huge amounts of carbon into the atmosphere.

The slow return to normal has its own knock-on effects, say the authors: it has an impact on biogeochemical cycles, on the energy balance and the hydrology of the region, all of which can in turn feed back into climate change.

So to understand the possible global consequences for the northern forests, the authors reasoned, it would pay dividends to make a case study of one sustained natural experiment in one easily accessible landscape.

The researchers found that, after bouts of burning in centuries past, the area was colonised by more fire-resistant species, and the same has begun to happen after the most recent fires.

They report that Yukon Flats is now a fragmented mosaic of “lower flammability vegetation” which ought to keep the place safe for a while.

But the fires of recent years have been the worst for 10,000 years and, they warn, things are likely to get worse: what happened to the conifers of Alaska could happen in other places as the world warms and the sub-Arctic begins to dry, with a change to deciduous trees.

“Such dynamics”, they say, “have potentially dramatic ecological impacts.”