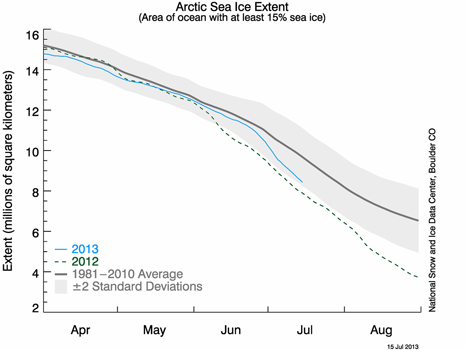 Ice loss in the Arctic is accelerating downwards, but has yet to reach 2012 levels (pic: National Snow and Ice Data Center)

Ice loss has been “even faster than usual” over the first two weeks of July, according to records from the National Snow and Ice Data Center (NSIDC).

Arctic sea ice normally retreats fastest during July, the warmest month of the year, but this year it has receded at a greater rate than usual – at 61% faster than the average rate of decline over the period 1981 to 2010, according to NSIDC.

While the ice is not quite at 2012 levels yet – the lowest year yet for summer ice – the accelerating downward trend could mean that it could catch up or overtake by mid-September, when Arctic ice is at its minimum. Scientists have predicted that the Arctic could be ice free by 2054.

“The trend at the moment suggests it won’t be quite such a bad year in terms of ice retreat as last year,” Peter Wadhams, Professor of Ocean Physics at the University of Cambridge, told RTCC.

“But it might still be a worse year because the trend is accelerating downwards and it’s heading for last year’s curve, so if it overtakes that then we’re going to end up with a lower minimum than last year.”

So far, the main ice loss has taken place on the Atlantic side of the Arctic, including the East Greenland, Kara and Laptev seas.

It is better news, however, along the Eurasian coast and the Pacific side of the Arctic, where the ice cover has remained fairly extensive, particularly compared to recent summers.

The slow retreat in the Beaufort Sea in particular has resulted in the most extensive ice cover there for the last seven summers.

However, even though ice remains extensive in the Chukchi sea, it has still retreated more than in previous years, particularly in 2012, when Shell was forced to reduce the number of wells plans and delay drilling operations. Satellite imaging confirms that melt is still well underway in both these areas.

“There are various predictions being made on the basis of the trends, but a lot simply depends on the Arctic weather,” says Wadhams.

“In the last month of summer, for instance, if we look at our own weather it has gone from unusually cold to unusually hot. The same thing can happen to the Arctic.”

Next week, it is predicted that a cyclone will hit the Arctic, with the potential to cause extra damage because it will arrive at a time when the ice is particularly thin.

Last year’s Great Arctic Cyclone was the 13th most powerful storm since satellite observations began in 1979, and is estimated to have destroyed about 800,000 square kilometres of ice.