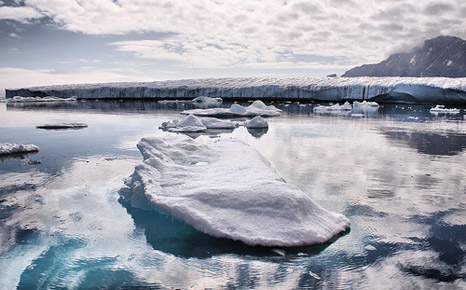 Melting ice in the Arctic is one of the best indicators of rising land and ocean temperatures, and could have serious knock-on effects

An economic time bomb is buried within the melting Arctic sea ice, scientists have warned.

The effect of the methane that is released as the permafrost in the East Siberian Sea melts will cost $60 trillion – the size of the global economy in 2012.

Researchers from Cambridge and Rotterdam wrote in Nature that the release of the 50 gigatonnes of methane trapped within the ice will trigger both an environmental and economic disaster.

In both cases, it is economically developing countries that are likely to be left to pick up the tab. Roughly 80% of the cost will be borne by poorer countries, where extreme weather, flooding, droughts and health problems pose the greatest threat.

“In parts of Asia and Africa where it’s just marginally possible to farm at the moment, if we have this methane going into the atmosphere on top of all the other greenhouse gases, those parts may end up being unable to be productive agriculturally – that’s part of where this 60 trillion dollars’ worth of impact comes from,” says Chris Hope, Reader in Policy Modelling at the University of Cambridge.

He told RTCC, “It’s a very nasty prospect for some parts of the world, and what we hope is that if we put this figure out there it will stimulate people to think, ‘Gosh, maybe we ought to be trying hard in order to avoid those kinds of impacts occurring.’

“Maybe it’ll add a bit more impetus to governments deciding to put a price on our greenhouse gas emissions or other efforts that might be made to stop climate change impacts being as bad as they otherwise would be.”

The study used the Page 09 model, used by the US EPA to measure the social costs of carbon, to calculate the various climate change possibilities of the Arctic ice methane emissions.

The model measures the economic impact of sea level rise, any factors that contribute towards the GDP such as losses of agriculture production, along with loss of ecosystems and the effects on human health.

“We ran the model 10,000 times with the ranges of values for all the different inputs to get a good picture of just how uncertain the effects were likely to be,” says Hope. “$60 trillion is the mean of those 10,000 runs.

“There’s a 5% change we could end up being really lucky and the climate sensitivity and the vulnerability of the economy are low and we don’t end up melting the ice sheets. Then there’s a 5% chance therefore the impacts will be below 10 trillion dollars.

“There’s also an equal chance we could be really unlucky and the climate sensitivity is a bit higher than we thought and sheets melt a bit quicker. Then there’s a 5% chance the impacts could be above 220 trillion dollars.”

The study, focusing on just the East Siberian Sea, models the economic impact of only a small proportion of the vast reservoirs of methane – a greenhouse gas with 50 times the warming effect of CO2.

Researchers still believe that this volume of emissions alone could have a catastrophic impact on climate change, predicting it could bring forward the moment when global temperatures reach 2 degrees by between 15 and 35 years.

But this is just a small proportion of the huge reservoirs of greenhouse gases trapped within not only the sea ice, but also within permafrost that is retreating over land mass as well.

Peter Wadhams, Professor of Ocean physics at the University of Cambridge, says that the East Siberian Sea amounts to only about a quarter of the total area of the Arctic shelf.

He told RTCC, “Until more research is done we can’t say how much will be released from elsewhere, or how much is going to be released from land sources. The permafrost on land, which is a much bigger area than the offshore permafrost, is also melting more slowly, but it’s releasing methane as well.”

The team focused the East Siberian Sea because it is particularly shallow, which means that the methane is released directly into the atmosphere, rather than passing through the ocean, which means it has the opportunity to dissolve and be emitted as the less potent CO2.

It was also possible because of the large amount of data available on the area, due to regular summer expeditions by the University of Alaska and the Pacific Ocean Graphic Institute in Vladivostok.

Gathering the kind of data needed to replicate the study across the rest of the ice shelf could pose difficulties, as the other large areas of shallow continental shelf are mostly in the Russian economic zone of the Arctic.

Any research has to be collaborative between Russian and Western organisations, which can be difficult to set up due to Russia’s sensitivity about their reliance on the oil resources contained beneath the ice.

She told RTCC, “Right now, for most Arctic countries, the governments are focused on relatively short term economic gains from access to natural resources and increased shipping.

However, this discussion needs to include the bigger picture.  By identifying that nearly 80% of the impacts from this one feedback will be felt by developing countries, we are hoping that the governments of these countries will become more active on Arctic issues.”

She says that while it is a good first step that the World Economic Forum has started to recognise the strategic importance of the Arctic, establishing the first Global Agenda Council on the Arctic last autumn, more still needs to be done.

She suggests that there needs to be a more comprehensive discussion within the council, and that the European Commission provides more help to projects that combine climate science with economics.

“I think it’s important to have a calculation of that, even though it’s always going to be an uncertain number, because that’s the way it gets into these kinds of forums like the World Economic Forum, into governments and into the decision making processes of big companies.”