Antarctic and Greenland glaciers at risk of “catastrophic breakup” 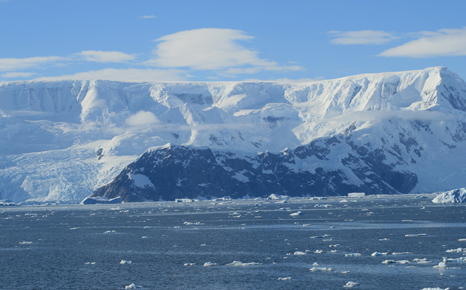 Glacial mass changes are considered among the most sensitive indicators of climate change (Pic: edubucher)

Large stretches of ice along the Greenland and Antarctic coastlines are at risk of “catastrophic breakup”, new research has warned.

Using a new model to anticipate the calving of glaciers – the process where large chunks of ice break off and float into the sea to create icebergs, exacerbating the problem of rising sea levels.

Scientists from the University of Michigan have pointed to the Thwaites and Pine Island glaciers in Antarctica and the Jakobshavn Glacier in Greenland as being particularly at risk of catastrophic disintegration.

“If this starts to happen and we’re right, we might be closer to the higher end of sea level rise estimates for the next 100 years,” said Jeremy Bassis, , the first author of the paper, which appears in Nature Geoscience.

The vulnerability of these two ice stretches is exacerbated by a number of factors, including the fact that they are bordered by deep and unobstructed ocean rather than fjords or other waterways.

This means the calved icebergs can float away into open water, creating room for more to break off from the main ice sheet. The Jakobshavn Glacier in Greenland is already retreating rapidly.

The model establishes a critical threshold at which glaciers are likely to start breaking up, although Bassis suspects that climate change can cause icebergs to form before this threshold is reached.

Melted water pools, which occur more frequently as the planet warms, cut through the surface of the glacier, which destabilizes it and increases the likelihood of it calving.

This is believed to have played a role in the rapid disintegration of the Larsen B ice shelf in Antarctica, which crumbled over about six weeks in 2002.

Calving accounts for about half the mass lost from ice sheets, and can have severe impact on sea level rise. Despite this, it is not reflected in the model of how climate change affects ice sheets, says Bassis.

“Fifty percent of the total mass loss from the ice sheets, we just don’t understand. We essentially haven’t been able to predict that, so events such as rapid disintegration aren’t included in those estimates,” Bassis said.

“Our new model helps us understand the different parameters, and that gives us hope that we can better predict how things will change in the future.”