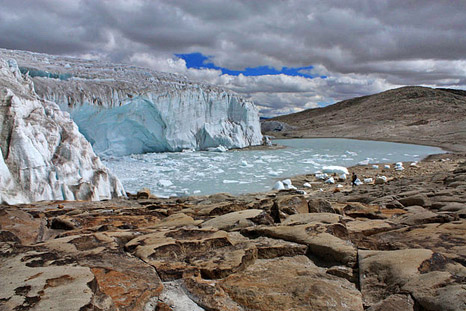 The 2007 IPCC report indicated glaciers in the Himalaya could disappear by 2035 if current rates of warming continued (Pic: Edu Bucher)

The UN’s climate science body has dismissed reports in a UK newspaper that a major new study could suggest climate change will be less severe than once thought.

Last week The Economist published a table it says could feature in the forthcoming fifth assessment report (AR5) by the Intergovernmental Panel on Climate Change (IPCC).

The figures reveal that carbon dioxide could have a smaller impact on global temperatures than scientists predicted in 2007, opening the possibility greenhouse gas emissions do not have to be radically cut.

A statement from the IPCC said the article was “premature” and “misleading” because research has not yet been published.

“This draft, like any IPCC draft, is the result of the IPCC’s iterative process of writing and review process and thus a work in progress,” it said.

“Draft reports are intermediate products and do not represent the scientific view that the IPCC provides on the state of knowledge of climate change and its potential environmental and socio-economic impacts at the conclusion of the process,” it added.

Scientists involved in the IPCC process have been quick to condemn the leak as inaccurate, pointing out the data is from Working Group III, which does not directly deal with what is called ‘climate sensitivity’.

This refers to the relationship between levels of carbon dioxide in the atmosphere and warming.

The higher the climate sensitivity, the more warming there is likely to be. But if, as the Economist article suggests, the figure is lower, that could mean factors other than greenhouse gases are also responsible.

Scientists involved in the process have told RTCC that it’s too early to judge the full report on the basis of a leaked graph.

Piers Forster from the University of Leeds pointed us to his recent paper in the Journal of Geophysical Research, which indicates that current warming projections are in line with past published reports.

Others have not been so restrained. “Quoting drafts, not fully reviewed, not informed by WG1 = not sensible,” tweeted NASA climate scientist Gavin Schmidt.

Fellow US climate expert Michael Mann emailed the the ThinkProgress website, arguing that: “the author hopelessly confuses transient warming (the warming observed at any particularly time) with committed warming (the total warming that you’ve committed to, which includes warming in the pipeline due to historical carbon emissions).”

“Even in the best case scenario, business as usual fossil fuel burning will almost certainly commit us to more than 2C (3.6 F) warming, an amount of warming that scientists who study climate change impacts tell us will lead to truly dangerous and potentially irreversible climate change.”

Kevin Trenberth from the US National Center for Atmospheric Research commented that since the drafting process is still ongoing, it is too early to draw conclusions.

The first elements of the AR5 study are expected to be released on September 23 after a government meeting to agree its findings.

A leaked version of the report last December indicated it would suggest there is now “incontrovertible evidence” that atmospheric concentrations of greenhouse gases have increased in the last 200 years.

The leak also indicated that projections on the rate of sea level rise, polar ice melt and the variability of extreme weather events could also increase.

Former UN climate chief Yvo de Boer has already drawn his own conclusion, claiming that it will “scare the wits out of everybody”.

This episode illustrates the growing level of interest in a study that will be analysed closely by climate campaigners and sceptics, and will be used by politicians to justify future policies.

AR5 is also likely to underpin efforts to create a global emissions deal in 2015, making its findings particularly relevant with the next major UN climate summit just four months away.

The IPCC has already run a series of seminars for journalists in an attempt to clarify what it sees as important issues, while PR firm Havas is advising the UN Foundation on how best to explain the report’s findings.