Tree-lined streets do not mean cleaner air, according to a new study by the Stockholm Environment Institute 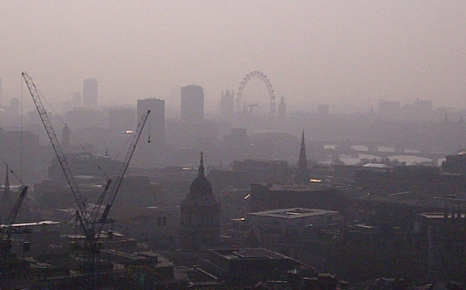 While London boils and the thermometer rises, so do pollution levels as plants and trees focus on staying alive

When heat waves strike, plants are more interested in self-preservation than in removing pollution from the air, a study has found.

Scientists from the Stockholm Environment Institute found that plants reduce their uptake of the harmful pollutant ozone in hot weather and drought conditions.

High pollution levels were linked to 460 deaths in the summer of 2006, when a heatwave hit the UK and parts of Europe.

Plants shut the small pores on their leaves to conserve water in hot and dry conditions. This stops them from absorbing ozone at a time when its concentrations in the air are at their highest.

In their research the scientists modelled two different scenarios for the summer, one with perfect ozone uptake by plants, and the other with minimal ozone absorption.

Where plants were only absorbing the minimum amount of ozone, it added to the summer the equivalent of 16 days where ozone levels were above the threshold of human safety, compared to when the plants were absorbing at optimum levels.

They found that, between June to July, about 970 deaths would have occurred under the minimal ozone uptake conditions, 460 of which could have been avoided if the plants had been absorbing at full capacity.

The impact of this reduced uptake is considerable, considering the vital role that plants and urban trees play in cleaning the air.

“Vegetation can absorb as much as 20% of the global atmospheric ozone production, so the potential impact on air quality is substantial,” says Lisa Emberson, who led the study.

Emberson told RTCC that the idea to quantify the effects of the reduced ozone uptake of plants came from another piece of research she had been doing on how plant are damaged by the ozone that they do take up.

It occurred to her, she said, that if the plants weren’t taking up ozone, then that would be leaving high concentrations in the atmosphere that could have serious impacts on human health.

At ground level, ozone is a serious pollutant which is estimated to cause 22,000 deaths every year in Europe.

The colourless gas is formed from emissions which react with the sunlight, sometimes forming a ‘summertime smog’. Although these originate in industrial or urban centres, these are carried downwind, meaning that ozone can be more of a problem in rural areas than it is in cities.

With the current heatwave, it is likely that plants are once again limiting their uptake of ozone, although Emberson says that the complex modelling that goes into each scenario means that it would take some time to exactly quantify the effects. The precise extent of the problem depends on how dry the soil gets, as well as the heat.

“When you get this combination of factors coming together, then you can see more problems in terms of human health,” she says.

Ground level ozone can cause lung inflammation and an increase in asthma attacks. It is a particular problem for people who suffer from respiratory and cardiovascular diseases, she explains.

“I think the main research message coming out of that is we better need to understand how climate change is going to go forwards in the future, and also to better understand if we need to make even more aggressive attempts at reducing ozone precursor pollutants and their emissions.”

The research is also a correcting force to those who entertain the illusion that a weekend escape to the country will purge their lungs of the pollution that has built up during the week.

Ozone is also removed from the city by its ability to react with nitric oxide, for which emissions are also greater in urban areas.