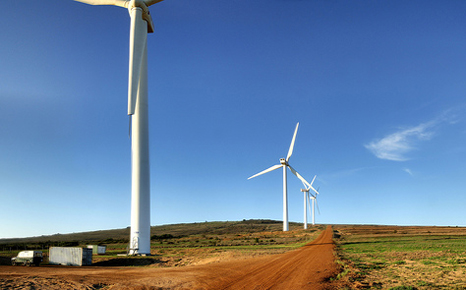 The $1.3 billion Renewables Support Programme, supported by the World Bank, African Bank and International Bank for Reconstruction and Development, will offer Eskom support in building a windfarm and one of the world’s largest concentrating solar power (CSP) plants.

Eskom has started construction on the wind farm, the US$1.8 billion Sere project, as well as signing power purchase agreements for more than 2,400MW of renewable energy with new independent power producers procured by the Department of Energy.

The farm will generate up to 100MW of power for the national grid, avoiding nearly 4.7 million tons of carbon emissions over 20 years, producing enough clean energy to power about 97,000 homes.

“South Africa has embedded its renewable energy ambitions in an “electricity roadmap” called the Integrated Resource Plan of 2010 and has set a target of achieving 19GW of renewable energy electricity in the national grid by 2030,” WWF International’s Global Climate & Energy Programme’s Mandy Jean Woods told RTCC.

“The process to roll out renewable energy began about two years ago and currently it is about to close on a third round of bidding for the generation of the first 3,500MW. What we see in South Africa is the success of a rather coordinated and inclusive planning process with various actors in this energy field over the last years.”

Solarcentury, together with South African company Momentous Energy have formed a joint venture based in Johannesburg.

Solarcentury Africa will be working across the commercial roof, solar park and isolated grid markets, to meet the increasing energy demands of businesses across Southern Africa.

The conglomerate has already completed its first project – a roof installation for a large property company, and is also planning to install the biggest solar roof-top system in South Africa in the coming months.

“We have found South Africa to be a very straight forward market in which to operate,” Susannah Wood, director of marketing for Solarcentury told RTCC.

“I think the government really is considering renewables very seriously and I think we find it a very welcoming environment.

“The country is taking their energy situation very seriously and that’s one of the reasons why we find it a very attractive market.”

Woods from WWF said: “It is often forgotten in international debate that South Africa was world champion in renewable energy investments in 2012.

“South Africa invested almost 1% of its GDP into renewables last year and according to a recent assessment by Bloomberg New Energy Finance on the investment figures of the first two quarters in 2013 the country is on way to maintain that global role in this year.”