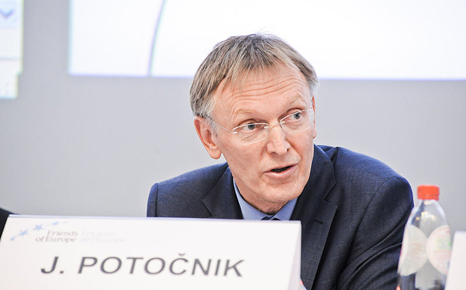 China and the EU will launch a joint a joint plan to promote green growth and tackle pollution on Friday.

Despite the pair’s high-profile spat over solar panel prices, China and the EU have maintained close links, and Beijing has asked for help in tackling pollution, which it believes could provoke civil unrest.

“We are focusing on three areas, one will be pollution with the heavy metals, one is water pollution, and one is waste treatment,” Potočnik told Reuters.

“If you’re following the statements of political leaders, obviously they are recognising that this is becoming a serious issue,” Potočnik said. “They are also addressing it more thoroughly with their political actions.”

With Europe’s cooperation, China will prepare its own climate law, initiate a carbon trading scheme and also procure a low carbon roadmap for 2015.

Speaking to the European Union Chamber of Commerce in Beijing, Potočnik acknowledged the environmental challenges faced by countries like China which is experiencing rapid industrial growth.

“It is our companies – Chinese and European – that will provide the solutions to do this and respond to these promising markets,” said Potočnik.

“It is the private sector that will bring about economic transformation. Turning challenges into opportunities to do more business and to do it better and smarter.”

In Beijing, Potočnik reiterated this: “China, one of the EU’s major trading partners, will be a key player is this transformation to more resource efficient production and products. Both the EU and China recognise that our future economic growth needs to be green. Environmental protection and economic growth must go hand in hand.”

“China is readying [its] climate legislation for 2014 and [it] will also implement a nationwide emissions trading scheme as of 2015,” said EU Climate Commissioner spokesman  Isaac Valero-Ladron.

He said the country is also preparing new emission targets although government officials are yet to clarify any details.

Last year the EU announced a €25 million funding programme for a variety of environmental initiatives in China, including €5 million to provide technical support.

“We’d like to increase our cooperation in that field,” said Ladron. “Without China it would be very difficult – almost impossible – to have a global binding deal by 2015 so I think it’s in Europe and China’s interest.

“What we’re trying to do here is foster and strengthen our cooperation. We need China on board and we need China signing up to a legally binding deal.”

A statement by the Chinese State Council said 10GW would be added each year until 2015.