“Get off the fence” on coal ash, scientist tells US EPA

Leading scientist claims coal ash, toxic substances and power plan emissions should be a priority for the next EPA chief 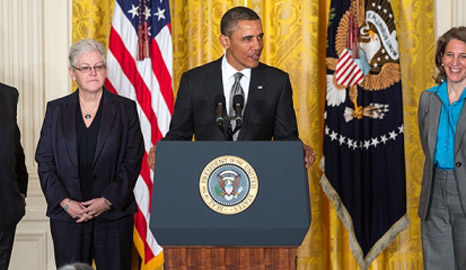 Gina McCarthy, Obama’s choice for the next Environmental Protection Agency leader, has faced opposition from Republicans

Coal ash, toxic substances and power plant emissions should be a priority for Gina McCarthy if she is appointed to lead the Environmental Protection Agency (EPA), an environmental scientist at Duke University has suggested.

William Chameides, the Nicholas Professor of the Environment at Duke University in North Carolina, said that the EPA should designate coal ash as a hazardous material, reform the Toxic Substance Control Act and propose carbon dioxide emissions rules for existing power plants if McCarthy takes up the position.

Chameides said, “The EPA has promised action on coal ash since the waning days of the Clinton presidency, but instead we get one delay after another, while research study after research study adds to the body of evidence showing the harmful effects coal ash has on the environment.”

Coal ash is produced when coal is burned. On average, 61 million metric tons are produced in the USA each year, of which 70-80% goes to landfill, with the rest being used for construction. It contains over a dozen heavy metals, including arsenic, mercury and lead, many of which are toxic.

It has been a matter of controversy for the EPA whether or not they should classify coal ash as hazardous waste, when doing so would impact heavily on the coal ash recycling industry. Last month, the House Energy and Commerce Committee passed a bill aimed at preventing the EPA from classifying it as hazardous.

He continued, “Working with Congress to reform the outdated Toxic Substance Control Act (TSCA) should likewise be a priority for McCarthy. TSCA no longer provides adequate protection from chemical risks in the products we buy. An estimated 80,000 chemicals are circulating in the market these days, but only nine are regulated as hazardous. That can’t be right.

“EPA should also take the plunge and propose carbon dioxide emissions rules for existing power plants. Such rules will force closure or significant refits for the nation’s dirtiest and least-efficient plants and, ultimately, wean the country off coal-fired power plants without carbon capture and storage capabilities.”

If McCarthy is nominated, she will find herself under greater pressure than her predecessor to enact such proposals, thanks to Obama’s recently announced Climate Action Plan, in which he stressed the responsibility of the EPA in combatting climate change.

Addressing Georgetown University in June, Obama said, “I’m directing the Environmental Protection Agency to put an end to the limitless dumping of carbon pollution from our power plants, and complete new pollution standards for both new and existing power plants.”

Responding to a memorandum to the EPA released on the same day as this address, the EPA last week released a redrafted proposal of the rules it released last year concerning the emissions of new power stations.

The fact that this redraft, the details of which have not yet been released, arrived way ahead of the schedule set by Obama, suggests that the EPA may be prepared to act with equal haste on his further directive to issue proposed carbon pollution standards for existing power plants by 1 June 2014, which are then to be enacted by June 2015.

Obama nominated McCarthy to head the agency on 4 March. She has already directed the EPA’s clean air policy for the last four years and built up a reputation as an effective bureaucrat under both parties.

Her appointment has been severely delayed by Republicans who are opposed to what they perceive as the overregulation of the EPA and to Obama’s efforts to combat climate change. The fact that objections tend to be to the EPA itself rather than to McCarthy personally has prompted suggestions that her nomination has been held hostage to politics. Republican attempts to block the debate mean that this has been the longest time that the EPA has been without a leader.

Obama has been criticised by his opponents for waging a ‘war on coal’. Yesterday, Mitch McConnell, a Republican senator from the coal mining state of Kentucky, launched a radio advert in which he claims that “President Obama and his allies view coal as a threat to their liberal ideology and green energy policies cooked up in Washington.”

However, now that the Republican Senator David Vitter has dropped his threat to filibuster her nomination over concerns over the transparency of the EPA, it is looking increasingly likely that the Senate Democrats will be able to get the 60 votes needed to bring the matter to vote.