85% of Filipinos say they are feeling effects of climate change 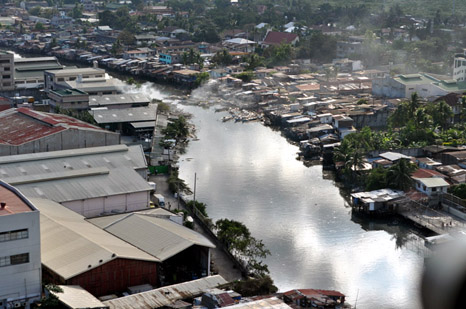 The informal settlements in urban areas are the worst hit by climate change, due to poor infrastructure

The impacts of climate change are a daily reality for 8 out of ten Filipinos, according to a recent survey of 1,800 adults across the country.

In the World Bank commissioned survey, 85% of those questioned said that they were personally feeling the effects of climate change, which are particularly pronounced across South East Asia.

The Philippines are the third most vulnerable country in the world to extreme weather events, such as typhoons, floods, landslides and droughts.

Last December, for instance, Typhoon Bopha swept across the country, killing thousands, and official trends monitored by the government in the Philippines show that the rainy season has become wetter while the dry season has become drier.

Secretary Lucille Sering, the Vice Chairperson of the Climate Change Commission in the Philippines said, “In the last several years, the country has suffered extreme weather events including long dry spells, heavy rains as well as strong typhoons and floods like those caused by Typhoons Ondoy and Pepeng.

These problems are aggravated by harmful practices that have led to the destruction of the forests, mangroves and corals, and the deterioration of the environment in general.

“Even some areas in Mindanao that we used to consider as ‘typhoon-free’ have recently been hit by very strong typhoons, floods and landslides.”

The effects are not limited to weather. According to the survey, climate change was also blamed for poor health, with many blaming the changes for dry skin, malaria and respiratory diseases.

Yet, according to a global report released last month by the World Bank, climate impacts are on course to worsen over the coming decades. In particular, it highlighted that informal settlements, accounting for 45% of the urban population, will be particularly vulnerable to floods due to a poor infrastructure. Agricultural productivity in rural areas will diminish.

Yeb Sano, the Climate Change Commissioner in the Philippines, said that this lack of knowledge comes down to the complexity of the issue.

“The survey shows 12% will have extensive understanding – that number probably represents people who know climate change in its whole spectrum.

“Climate change is basically so complex as a challenge that it would be really understandable if the population has a very small percentage of people who comprehend the concept altogether.”

“Extreme events when they happen do hit urban areas even more profoundly in general than the countryside, because of other factors that aggravate the climate challenge, including poor planning, misguided develop, environmental abuse and just the sheer volume of people who reside in urban centres,” explained Sano.

Those living in rural and coastal communities face threats to their livelihoods. The increasing acidification of the ocean across the whole of South East Asia will place enormous stress on coral reefs by 2050, damaging marine fisheries and tourism. Sano says that anecdotal evidence from farmers suggests that they are confused about when to plant and harvest, due to the rains coming in late.

“Many of the country’s poor derive income from agriculture, fishery and natural resources that are vulnerable to climate change,” says Motoo Konishi, the World Bank Country Director for the Philippines.

“Many of them live in danger zones such as waterways, areas that are low lying and flood prone, critical slopes as well as coastal zones, making them vulnerable to sea level rise and extreme weather events like strong typhoons and floods,”

In spite of this, efforts to reform climate change policy are limited in their effectiveness because they are only partially aligned with development plans, according to a recent review of the climate change situation in the Philippines by the World Bank. It suggests that the national, sectoral and local development plans do not fully cohere with the National Climate Change Action Plan.

Sano says, “We have 130 plus cities here and 1,500 municipalities. A national level of government agency like the Commission cannot practically cater directly, assisting all these local government units, so we need champions and we need communities that can serve as models.

“We are making a lot of headway there and the results are very promising. It’s not just on risk assessment. Now they are translating that into actions that they would include as part of their comprehensive development plan.

“It’s about answering the question on what kind of development they want, what matters most to them.”