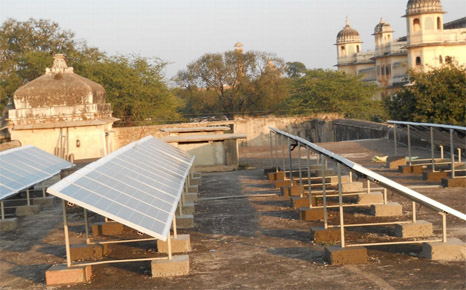 Chandigarh in northern India may have been hailed as a model solar city earlier this month, but confusion persists on whether the country’s plans to create 60 ‘solar cities’ will succeed.

A soaring population and chronic lack of access to electricity has forced the Delhi government to embrace radical measures, while attempting to cut high pollution levels that bedevil all of India’s major cities.

The Solar Cities programme was launched in May 2011 by the Ministry of New and Renewable Energy (MNRE). Its aim is to cut conventional energy use by a minimum of 10% over a period of five years.

So far 48 cities have been earmarked for development. One of the first in India was Agartala, the capital town of Tripura in the north-eastern part of the country where a 50kW solar power plant was established last year.

“The cities that have already started development are likely to stay ahead among others,” Jasmeet Khurana, analyst at market research company Bridge to India told RTCC.

“Whether these cities achieve their solar targets would only depend on how effective the state governments are at implementation. Big cities like Agra and Chandigarh may achieve their targets due to the significant initial push.”

About 30% of the Indian population live in urban areas. This is expected to increase by 36% by 2025, and increases the proportion of people vulnerable to environmental risks according to a report by design company Atkins, the UK Department for International Development and University College London.

Urban areas are heavily dependent on fossil fuels (which are often imported). The local governments and the electricity utilities are finding it difficult to cope with this rapid rise in demand and as a result most of the cities and towns face electricity shortages and blackouts.

The reasoning behind the solar cities programme is to motivate local governments to adopt renewable energy technologies and energy efficiency measures. In a Solar City all types of renewable energy-based projects like solar, wind, biomass, small hydro, waste to energy etc. can be installed.

A city is identified on population size and initiatives that have already been taken by the city council in promoting renewable energy and energy conservation. Exemptions have been extended to north-eastern states that are susceptible to flooding and other natural disasters.

The Ministry of new and renewable energy (MNRE) is expected to provide a total of Rs. 19.23 crore (approximately $3.5 million) for the preparation of master plans and promotional activities for 41 cities. A further Rs. 11.98 crore has been allocated for the execution of renewable energy projects in five cities.

The rooftop systems are grid connected where excess power will be sent to the grid while power can be drawn from the grid in case of shortage.

According to MNRE officials the potential of rooftop PV systems could be at least 20GW by 2015.

At the inauguration Minister Abdullah said, “We will need to attract all private agencies and public to install solar photovoltaic power plant on their rooftops for which he stressed the need for wider publicity.”

Under the solar cities programme, the state government is required to install 12 rooftop PV systems, but has only installed three so far.

One of the major challenges faced by any administration is effective enforcement of the orders issued, claims publication Solar Novus. On the consumer side, effective allocation of subsidies will be a key factor in the success of this initiative.

The Ministry of Statistics and Programme Implementation published a study last year demonstrating the many factors which affect the progress of projects.

This highlights a long list of delays, mainly linked to regulations, including delayed-availability of funds, land acquisition, law and order, ineffective procurement planning, delays in decision-making, weak/ineffective project planning and monitoring, contractual disputes and so on.

The government’s record in this sector is not all bad. The Jawaharlal Nehru National Solar Mission is one example of an effective scheme. This offers incentives for installing solar systems, mitigating the high upfront costs required for installing a rooftop PV system.

There are currently 17 cities under construction which include Chamoli-Gopeshwar in the state of Uttarakhand which suffered devastating floods last month, Combatore in Tamil Nadu and the cities of Indore, Bhopal and Rewa in the state of Madhya Pradesh.

“In terms of actual megawatts on [the] ground, this programme is not very ambitious,” said Jasmeet Khurana.

“However, it will help create an eco-system for adoption of solar power by consumers in the cities. Installations in public places will help create awareness among the people and any regulatory changes to accommodate [the] integration [of] these projects with the grid will clear the way for future parity based installations.”