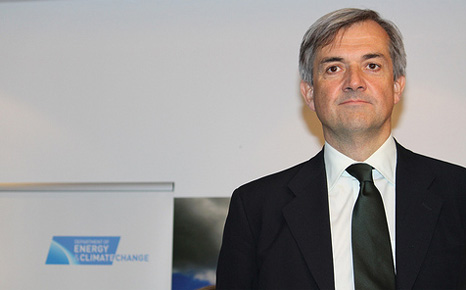 Huhne was Secretary of State for energy and climate change between 2010-2012, launching Green Deal proposals in 2011 (Pic: DECC)

The UK’s flagship energy efficiency programme is being fatally undermined by the Treasury and an ongoing battle over the Conservative party’s future strategy.

That’s the view of the former energy and climate Secretary of State Chris Huhne, who says the Green Deal scheme needs stronger support from the top of government.

According to government statistics, buildings that leak heat and waste energy account for 43% of the UK’s total greenhouse gas emissions.

Around 14 million homes in the UK require better insulation, but in June statistics revealed only 245 households had agreed a Green Deal Plan since its launch in January 2013.

And in one of his first interviews since his release from prison in May, Huhne, who unveiled the scheme in November 2011, says better incentives must be provided to homeowners for the scheme to flourish.

“Here is a classic green measure that can do a lot of energy-saving and increase living standards, and help jobs everywhere in the country. The government ought to be driving that more than it is,” he told RTCC.

Specifically, Huhne says a scheme where buyers committed to retrofitting their new homes would receive a discount on their stamp duty should have been introduced, perhaps an indication that efforts from the Department of Energy and Climate Change (DECC) to do just that may have been blocked.

“I think a very strong government lead would dramatically increase take up, because most people when they move home as owner occupiers are prepared to put up with a lot of decoration and work – this would simply be another part of that to ensure their energy bills came down,” he said.

“That potentially has fallen foul of the Treasury doing their usual abominable no-man act, and saying no, no, this would be against letting the market decide. And I think that’s a mistake and a misunderstanding of the nature of the programme and of the benefits.”

He added: “I think a lot of the difficulties in implementing the things the government has done like the Green Deal stem from ideological issues within the Tory party, about having regulatory drivers for the programme.”

Energy efficiency and the rising costs of utility bills are in the front line of the political battle over the UK’s low carbon future.

Today energy supplier RWE npower released research predicting bills could rise 19% by 2020 due to investment in ‘green’ infrastructure. The government says the Green Deal and other efficiency schemes will ensure bills are lower in the 2020s.

“There are some tough political choices to be made, not least in using the tax regime to nudge householders into action, but the opportunities for UK Plc are just so great, that this is a nettle which needs to be grasped,” the Council’s Chief Executive Paul King said in a statement.

In a paper published last week, it also suggested additional incentives such as council tax discounts for energy efficient properties and energy efficiency feed-in tariffs could increase the number of annual retrofits by up to 1.5 million and contribute hundreds of millions of pounds to the UK economy each year.

“There is plenty more to do on energy efficiency. Our politicians are starting to realise that saving energy isn’t a charitable act but a market opportunity,” the Alliance’s senior policy advisor Alastair Harper said.

“We now need to get on with putting a price on energy saved, which will help create thousands of new innovative businesses that will save the public money and reduce the need for more costly power stations.”

Huhne, who praised climate minister Greg Barker and cabinet minister Oliver Letwin for pushing climate ambition within the Conservative party, believes the Green Deal will be a success if the top of government takes a lead and forces the Treasury to offer more support.

“If we don’t do that with public vaccination on MMR, and we have an opt-in, look what happens when you let the Daily Mail set the agenda with the MMR, you end up with lots of kids dying in Swansea and elsewhere, because measles is a dangerous disease,” he said.

“There is a basic philosophical issue there which has bedevilled the take-up on Green Deal. It was always very clear that unless we had a strong government lead, take-up was not going to be adequate.

He added: “The real problem has been it required more than one department to play ball, not just DECC, but also the Treasury, and it has not been prepared to see the jobs advantages, the living standards advantages of doing that.”