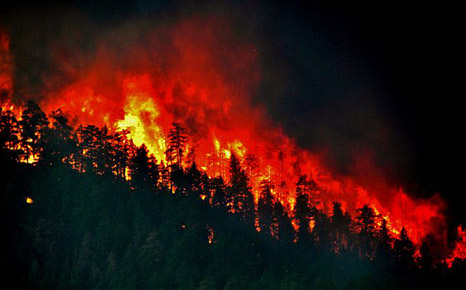 Hot and dry weather across the US, Australia and Singapore have resulted in devastating and dangerous wildfires. (Source: US Dept of Agriculture)

New research by US scientists suggests the extent to which wildfires impact climate change may have been overlooked. Previously most research has focused on how warming temperatures will make fires more common.

When studying smoke and soot from the largest wildfire in New Mexico near the Los Alamos National Laboratory in 2011, scientists discovered “tar balls” – soot with organic coatings that concentrate heat absorption.

Scientists had previously believed that emissions from biomass burning and fires were made up of black soot, which is a warming agent, and white smoke which cancels out the soot because of the smoke’s cooling effect.

Soot absorbs sunlight in the atmosphere, causing changes in rainfall patterns, and when deposited on snow and ice, accelerates melting. In addition, soot can cause direct effects on health and agriculture.

“We’ve found that substances resembling tar balls dominate, and even the soot is coated by organics that focus sunlight,” said Dubey. “Both components can potentially increase climate warming by increased light absorption.”

The discovery of tar balls indicates that wildfire emissions throughout the globe could contribute far more to climate warming than current estimates show.

Dubey said: “Most climate assessment models treat fire emissions as a mixture of pure soot and organic carbon aerosols that offset the respective warming and cooling effects of one another on climate.

“However Las Conchas results show that tar balls exceed soot by a factor of 10 and the soot gets coated by organics in fire emissions, each resulting in more of a warming effect than is currently assumed.

“Tar balls can absorb sunlight at shorter blue and ultraviolet wavelengths (also called brown carbon due to the colour) and can cause substantial warming,” Dubey continued.

“Furthermore, organic coatings on soot act like lenses that focus sunlight, amplifying the absorption and warming by soot by a factor of 2 or more. This has a huge impact on how they should be treated in computer models.”

Hot and dry weather across the US, Australia and Singapore have resulted in devastating and dangerous wildfires that persisted for several days destroying homes and land.

In the US, major wildfires are burning in Colorado, Alaska, California, Arizona and near Las Vegas, Nevada.

This year was a rough start for Australians when average temperatures exceeded 40.33°C, the highest since 1972.

“We should all be recognising [the seriousness of] black carbon particles and we should start to have policies to control them globally,” said Dubey.

“With climate change, the fires will likely come more frequently.”