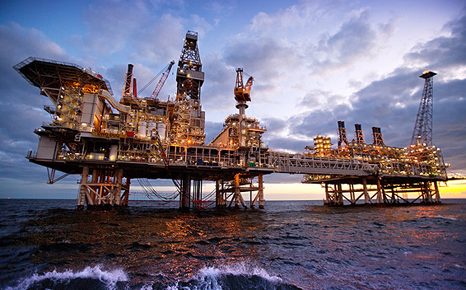 Carbon dioxide could be injected into former gas and oil fields – but tests need to be carried out to assess their stability (Pic: BP)

Anybody planning carbon capture and storage  (CCS) – one way to burn fossil fuels without releasing greenhouse gases – will have to think long and hard about where to put the carbon dioxide.

Long, because it must be kept secure for thousands of years, hard because even the hardest rocks yield under pressure.

The technology exists and CCS is already one potential amelioration of the greenhouse problem. Energy companies have been condensing carbon dioxide from power station exhausts and gas and oil fields, and finding places to store it, usually deep underground.

But deep burial may not be a permanent solution, which is why James Verdon, an earth scientist at the University of Bristol in the United Kingdom, and colleagues report in the Proceedings of the National Academy of Sciences that they decided to take a more careful look at three cases of long-term disposal.

Three million tonnes of carbon dioxide (think of this as the exhausts from 500,000 cars) have been buried every year since 2000 in an oil and gas reservoir below Weyburn, in Saskatchewan, Canada.

Around a million tonnes of liquefied CO2 each year is now stripped from natural gas and pumped back into the Sleipner field under the Norwegian North Sea, and in the last seven years almost four million tonnes has been put back deep under a natural gas field at In Salah in Algeria.

In each case, the gas exerts pressure on the surrounding rocks, in the case of the Weyburn field permeating pores and colonising gaps left by more than five decades of oil extraction; what geologists need to know is how the rocks react to this new pressure and whether the gas will migrate.

They also need to understand whether there is a history of faulting, and whether the process is likely to trigger earthquakes. This last possibility presents what the researchers delicately describe as a “significant ‘own goal’ from a public relations and political perspective”, so the stakes are high.

The risks also include the opening of existing fractures; damage to the rocks that cap the reservoirs, failures of the wells bored into the storage site and the deformation of the entire geological structure. And since nothing in geology happens in a hurry, the scientists have to calculate probabilities of hazard for thousands of years.

They found enough geomechanical deformation to clear up one point: every deep storage and burial site is likely to be different, and anyone who chooses the CCS solution will have to think carefully.

The authors don’t use the Goldilocks metaphor – not too big, not too hot, just right – from the children’s fairy story, but the intent is clear enough. Each case needs to be considered on its merits; each burial site will need long-term monitoring.

To make a difference to total emissions, billions of tonnes must be stored each year, and the industry must find at least 3,000 sites like the Sleipner field.

“Every future CCS site will have a different geological setting, and our study has shown that this can lead to very different responses to CO2 injection,” Dr Verdon warns. “There is not likely to be a one-size fits all approach to CCS.”