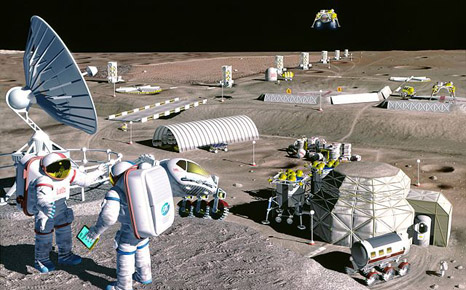 Congress is cutting NASA’s climate change budgets in favour of creating colonies on the moon and Mars. (Source: NASA)

The US Congress plans to cut climate change initiatives whilst boosting funds for space exploration.

A provisional Bill released in June stated: “It is the policy of the United States that the development of capabilities and technologies necessary for human missions to lunar orbit, the surface of the Moon, the surface of Mars, and beyond shall be the goals of the Administration’s human space flight program.”

Congress has been largely hostile to any new climate change initiatives during Barack Obama’s term in office, leading the President to explore other ways of cutting the country’s carbon footprint.

Obama emphasised his commitment to addressing rising global temperatures with the release of his Climate Action Plan.

This was effectively a set of policies using Presidential powers to enforce carbon cuts, although he left the door open to future cooperation with opponents.

“I urged Congress to come up with a bipartisan, market-based solution to climate change, like the one that Republican and Democratic senators worked on together a few years ago. And I still want to see that happen. I’m willing to work with anyone to make that happen.”

On a global level, Anthony Hobley, global head, sustainability and climate change at the Norton Rose Fulbright law firm, cautioned that in order for the US to be able to be part of any treaty, he would need to encourage “a divided Congress into action”.

“Note that the work NASA does in the area of climate change is not separated into one budget category,” said Steve Cole, communications officer at NASA.

“We fund many types of Earth science research, some of which is related to climate change directly or indirectly.

“Many of the spacecraft we are building and operating contribute to climate change studies but they are not devoted only to that area of research, so we don’t have a single simple number for climate research.”

In April NASA’s chief climate scientist James Hansen, who issued the clearest warning about the dangers of global warming, retired from the agency, arguing that it would give him freedom to pursue political and legal efforts to limit greenhouse gas emissions.

“The situation we’re creating for young people and future generations is that we’re handing them a climate system which is potentially out of their control,” hansen said. “We’re in an emergency: you can see what’s on the horizon over the next few decades with the effects it will have on ecosystems, sea level and species extinction.”