Comment: it’s time for the fourth era of climate change

Climate change: why global solidarity is antidote to toxic denial and blame 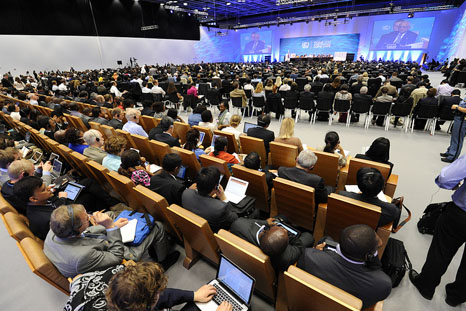 UN climate talks have long been torn between the conflicting demands of developed and developing countries (Pic: UNFCCC)

Over recent decades the debate about what to do about climate change has been muddied with blame and denial. These twin toxins have poisoned progress at its roots.

It is time for a new way to look at the problem of climate change, a new way to identify solutions. Solidarity is the lens we now need to look through to see clearly where we can move forward together.

Climate change is not a new problem. Joseph Fourier discovered the greenhouse effect nearly 200 years ago, in 1824. Of course, power can be slow to see reason. But still, more than three decades have passed since the global community recognised the problem and agreed to do something about it at the 1992 UN Conference on Environment and Development in Rio.

Then, nearly every country on the planet signed up to the UN Framework Convention on Climate Change (UNFCCC), yet global emissions of greenhouse gases continue to rise. As does the sea level, and the number of extreme climatic events.

Over the years I have spent working on climate change, I have noticed that the way we perceive the problem determines the proposed solutions. As perceptions have shifted, so have the ideas about who must act and how. This suggests that if we look at the problem in a new light, we will find new ways to solve it.

It is time for what I call the fourth era of climate change.

From 1990 to 2000, climate change was perceived largely as an “environmental” problem, due to emissions of greenhouse gases into the atmosphere. Hence the solution was reducing those harmful emissions (or “mitigation”).

The entire UNFCCC and its Kyoto Protocol were built around how countries – initially industrialised ones — could reduce their emissions. This paradigm also meant that the primary government ministries involved were the Ministries of Environment.

In 2001, things changed. That’s when the Intergovernmental Panel on Climate Change (IPCC) published its Third Assessment Report. It said that no amount of mitigation could prevent some degree of negative impacts of human induced climate change.

Hence the solution of adaptation involved not just ministries of environment but many other development related ministries and other actors.

Since around 2009, a new understanding of the climate change problem has emerged, namely that of “climate justice”. This framed the problem in purely moral — not environmental or even developmental — terms. This framing contrasts the climate-changing pollution caused by both rich countries and rich people in poorer countries with the fact that it is the poor nations and poor people in richer nations who are most vulnerable to climate change.

Hence the solution also becomes moral. If any individual’s carbon footprint is larger than global average (which is true for most people in rich countries and large numbers of rich people in poorer countries) then they are part of the problem and they need to recognise their individual responsibilities and make themselves part of the solution.

Climate change is inherently unjust, unfair and iniquitous. Hence, my own preferred term is “climate injustice” as that describes the current system and state amongst nations and people.

As such this can be tackled, not in an abstract aim for perfect justice but in concrete terms to correct a “manifest injustice”. It is far easier to mobilise people against an injustice than to mobilise them for an ideal of justice.

The new solution we need to apply to this framing of the climate change problem is one of “global solidarity”. This would enable the individual polluter (be they in a rich country or poor country) to recognise his or her personal responsibility and to try to connect with the victims of their pollution.

This not just about giving money, although that is part of it.

It is much more about making human-to-human connections across the planet between the polluter and the victim of pollution to get to know one another and to support each other and learn from each other.

This is the challenge. But with modern technologies this connection between people in different parts of the planet becomes much more possible and is already beginning to happen.

Millions of people worldwide are already connected through Facebook and other online social networks to friends around the world.

Friendship and solidarity ignore borders. Our increasingly internationalised youth will look back on the failure of nations to work together to tackle climate change with incredulity.

It is time for national interests to give way to the global good.