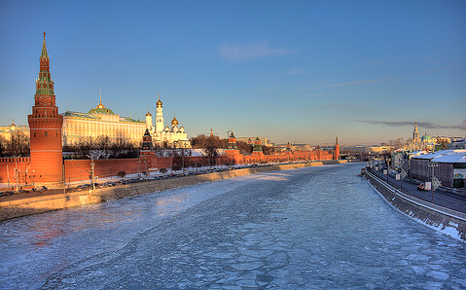 The Russian government appears to be committed to launching a pilot carbon scheme by 2014 (Pic: Flickr/Kazachkov)

Last Friday was a rather busy day in the odd world of Russian climate change policy, with two high-level expert meetings competing for participants and producing equally exciting outcomes.

Russia’s interministerial working group on climate change and sustainable development, headed by presidential advisor and climate envoy Alexander Bedritsky, had its second meeting, this time focusing on both topics.

At its inauguration in February the group endorsed a 25% below 1990 target to be set by the ill-fated draft presidential decree.

In what now looks like a cycle of climate crazy, the draft decree, after getting every ministry’s endorsement, has apparently been – again! – booted back by the president’s administration, and it may take another six months for it to finally be signed.

As one participant told RTCC, the second meeting was ‘certainly funnier’ than the first one – for instance, just this week the Russian government amended the rules for Kyoto joint implementation projects, which Russia can no longer host in absence of new KP commitments.

This profoundly schizophrenic move may, however, allow the issuance of some 150-200 million ERUs, according to Ministry of Economic Development, Sberbank and other analysts – given that so far we have only issued around 230 million, it’s rather hard to see how this figure could be doubled without new JI projects.

Two possible avenues could be formally registering projects that were approved but unlucky enough not to get their emission units before 2013 or simply ‘reconsidering’ the amount of ERUs for old ones.

The group also discussed progress in climate policy at different forums such as G8, G20 and, of course, the UN climate talks.

“I was quite surprised by this revolutionary idea that, apparently, it was G77 and China who blocked all progress in the Subsidiary Body for Implementation this June in Bonn, while Russia was widely supported in raising a very important issue”, the expert told RTCC.

Well, that’s certainly one way to look at it. But the most interesting thing about this particular working group meeting was, incidentally, not in what happened there.

According to the source, quite a lot of its members were missing, including MED’s Oleg Pluzhnikov, representatives from the Ministry of Foreign Affairs and business experts. Some of them were at another meeting in the economic ministry chaired by no one other than deputy minister Sergey Belyakov.

Another source who had to choose MED over the working group told RTCC that during what appeared to be literally five minutes of discussion, everyone agreed to go ahead with developing a blueprint for the future national carbon mechanism.

Delovaya Rossiya, the business lobby group which recently hosted a roundtable on carbon markets and competitiveness, will write a scope statement for this analytical mini project, to be funded by Sberbank and possibly another major state bank, VTB.

This scope statement will most likely be ready within a month, and the whole project, which aims to research the carbon market experience in other countries and produce recommendations for Russia, is to be completed by November – so as to “then proceed directly to deciding what’s to happen next, in 2014”.

“The work will likely begin next week… But frankly, if I could, I would start today”, said the overly enthusiastic source.

Earlier this year Belyakov was reported to have signed up to the Ministry’s proposals for a pilot phase of a national emissions trading system to be developed as soon as in 2014.

And while the ministry officials were quick to downplay the urgency this task is being approached with, it is clear that much of the work has already been done in expert meetings, so the possible debate will most likely be political and not technical. It is worth noting that the two meetings seem to have endorsed somewhat different approaches to carbon regulation.

Bedritsky’s group tacitly supported a more project-based approach, which is more acceptable to bigger businesses wary of a possible burden of carbon pricing, whereas the MED track tends to generally lean towards market-based initiatives.

If history is any indication, this might be a good thing: when everyone was simply agreeing that Russia needs some sort of carbon market, there was no trace of hope for one – maybe it’s the difference of opinions that will ultimately make it happen.