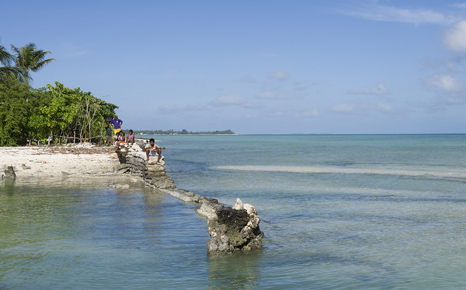 Australian National Tidal Centre reports that sea levels in Kiribati have averaged a rise of 3.7 millimetres a year since 1992 (Pic: UN)

Pacific Island leaders meeting in Fiji this week aim to lay the foundations for a regional plan to cope with the increasingly severe impacts of climate change.

They hope to start work on a strategy to collectively deal with these challenges that will be agreed in 2015, the same year a global emissions deal could be signed off at the UN.

Two weeks ago the capital of the Marshall Islands disappeared underwater as a result of high tides, while in 2012 the impact of extreme weather events cost Fiji $100 million, and knocked 29% off Samoa’s GDP.

“Studies have been carried out – we have been involved in most of them. Output from both studies indicates sea level rise, more and stronger tropical cyclones, and what is clear is that the climate is predicted to be more variable, and at times extreme events will become more frequent.”

Pacific Island nations have worked closely with the Alliance of Small Island States (AOSIS) to push for greater emission cuts at the UN climate talks.

But with carbon dioxide levels rising fast there is an evident need to focus on how to cope with climate-related disasters.

Recently Fiji offered 6,000 acres of land to the low-lying island state of Kiribati for food security purposes, while there are also plans to create a network of meteorological stations that can provide better warnings of extreme weather events.

“One of the core things that needs to be ironed out is the gathering and monitoring of data. We cannot provide good adaptation if data is not available on a timely and accurate basis,” Fa’anunu said.

“Trying to maintain an observation network is one of our biggest challenges. Many of us will be attending that meeting – it’s important to come together and formulate a roadmap for the region in climate change, adaptation and disaster risk management.”

The forthcoming UN review of climate science collated by the Intergovernmental panel on Climate Change (IPCC) is likely to offer Pacific states clues on what they can expect in the coming years.

The UN’s last major report in 2007 (AR4) warned that islands could expect accelerated coastal erosion, diminishing freshwater supplies and increased flooding from the sea cause large effects on human settlements.

“Less rainfall coupled with accelerated sea-level rise compound the threat on water resources; a 10% reduction in average rainfall by 2050 is likely to correspond to a 20% reduction in the size of the freshwater lens on Tarawa Atoll, Kiribati,” it added.

Studies undertaken under the Pacific Islands Climate Change Science Program indicate that sea levels are rising around the Solomon Islands by about 8mm per year since 1993, higher than the global average of 2.8–3.6mm per year.

Pacific leaders have been urged to develop a 25-30 year strategy that involves business and civil society, strengthening physical sea defences and building awareness among populations.

“I urge the world to follow the example of the Pacific and abandon the current norm of running separate and parallel strategies for disaster risk management and climate change. By committing to integrate the two approaches, the Pacific will benefit millions of people and avoid billions of dollars in economic losses,” said the the Head of the UN Office for Disaster Risk Reduction (UNISDR), Margareta Wahlström.

“If the rest of the world follows suit then the equation is transformed further: then billions of people will benefit and trillions of dollars of losses will be avoided. It is difficult to imagine a bigger sustainable development opportunity that is within our grasp if we have the courage and vision to seize it.”

“This is a historic meeting which will integrate responses to climate change and natural disasters in The Pacific region,” said David Sheppard, head of the South Pacific Regional Environment Programme (SPREP).

“This meeting will identify the key areas of focus and synergy between the two critical areas for our region.”