Whether it was a carbon tax or a cap and trade system, the political polar opposites in Washington have never found climate legislation they could all get behind.

But as the world’s largest economy and second highest emitter, it is vital that the US finds a more fundamental means to tackle its greenhouse gases despite opposition from Republicans.

Adele Morris, a former White House staffer in the George W Bush era thinks she might have designed a carbon tax that typically climate hostile Republicans can get behind.

“As I say to my friends that are very concerned about climate change…Why not give the money [from a carbon tax] to the Republicans? Let them cut corporation tax. What do you care if you think the earth is burning,” she told RTCC earlier this year.

Trading the health of the planet for something with more appeal to Republicans is the basic premise of Morris’ plan.

“My hope is that there is an economic way to sell this that doesn’t fabricate green jobs. It’s a well-grounded proposal in the economic literature. People can’t shoot this down as just another job-killing energy tax,” she says. 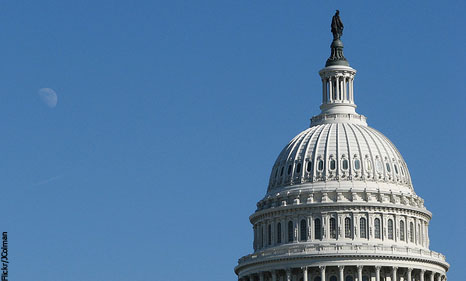 Obama avoided Congress with his climate change plans sticking to proposals within his executive powers instead (Source: Flickr/JColman)

“According to my calculations, you could use carbon tax revenue in the first decade to reduce corporate income tax rates from 35% to 28%. That’s the level the President has called for. Republicans would like to go lower but you could at least get to 28% and have a little left over.”

American corporation tax rates are among the highest in the world with a complex set of loophole riddled exceptions meaning that despite the high rate, it is fairly ineffective.

“As the tax goes up over time there could be additional revenue that could be used to reduce the budget deficit,” she adds.

Speaking to RTCC he says he is not convinced that Morris’ $16 starting point is sufficiently high, particularly given that the US Administration recently increased its estimate for the social costs of emitting carbon.

“The suggestion now looks too low in the light of the EPA’s recently revised calculations which give a value of about $36 per tonne of CO2 at a 3% discount rate.

“There are also many other calculations that would suggest a higher initial value, including my own work and our team’s recently published Nature Climate Change paper. Both suggest a figure nearer $100 per tonne of CO2.”

Despite this, Hope backs Morris’ claim that her proposal would ultimately help grow the economy.

“The paper quotes some modelling results to show that the net result would be pro-growth. These results seem quite reasonable, particularly at a time of low growth and structural unemployment,” he says.

At present the main tool to reduce emissions is through regulations on coal power plants through the Environment Protection Agency’s (EPA) Clean Air Act that treats carbon dioxide as a pollutant.

They have shut the dirtiest and have forced others to invest in infrastructure to clean up what comes out of their chimneys.

The National Resources Defence Council (NRDC) predicts emissions from power plants could fall 26% by 2020 compared to 2005 levels. The changes have already proved deeply unpopular with Republicans who have blocked Obama’s nomination for new EPA chief, leaving the organisation rudderless.

Morris found that her proposal would cut emissions by a total of 9.2 gigatonnes of CO2 during the first two decades. It could also promote business, clear obstacles for the renewables industry and knock $815bn off the deficit at the same time.

“If you combine the pro-growth tax reform with a suspension of the Clean Air Act regulations on greenhouse gases and reduction in clean energy subsidies that are made redundant [by the deterrent that the tax puts dirtier fuels] then you have a story to tell Republicans. I think there’s a deal to made there,” says Morris.

In addition to using around 85% of the revenue to fund a cut in corporation tax, Morris believes 15% should be set aside to put protections in place to protect the poorest from any possible price implications should firms decide to pass on costs.

Multiple proposals for a carbon tax have been lodged. In February Senators Barbara Boxer and Bernie Sanders proposed a $20 per tonne carbon tax.

As part of their plan, they suggested adding the carbon tax to imported goods and fuels as well so that domestic business was not damaged, a key concern for Republicans.

When the office of House Speaker John Boehner was asked last summer if a carbon tax that drove down the deficit would be acceptable the response that came back was brief, “No”.

Winning support from the most hostile Republicans is clearly not going to be easy.

Painting the carbon tax debate in the US as Republicans versus Democrats isn’t entirely representative. Those that oppose it are firmly entrenched and will be difficult to win round but the body of evidence is growing.

Support for carbon taxes, not just in the US and if the Republicans look harder at the plans without dismissing them out of hand, they may like what they see.

Nick Robins, head of HSBC’s climate change centre of excellence says carbon taxes, done right, can be successful on a number of levels.

“A carbon tax certainly has the potential to help with fiscal restructuring, spur clean growth and drive down emissions: a triple benefit,” he says.

Writing for EconoMonitor, the economist Ed Dolan bemoaned the absence of a carbon tax from Obama’s recent climate change proposals.

“Conservatives have been swift to attack it as a ‘backdoor energy tax’. The critics could not be more wrong. A carbon tax, or energy tax of any kind, is the one big piece that is missing from the President’s plan.

“Even a low rate of [carbon] tax would raise a large amount of revenue,” he writes, echoing Morris’ logic.

Wrong side of history

If it is such a good idea, will the Republicans sign up to it?

“Not right now,” says Alden Meyer of the Union of Concerned Scientists.

He tells RTCC that if the country is to do better than its pledge to cut emissions by 17% by 2020 compared to 2005 levels, it will need more than the regulatory changes Obama has proposed.

“To get deep reductions and a near elimination of CO2 emissions you do need some kind of economy wide mechanism whether it’s a cap, like the Waxman-Markey would have been or a price on carbon to complement the regulatory and incentive strategy.

“There’s an interesting debate inside the Republican Party. People like Bob Inglis are talking about the need to acknowledge the reality of climate change and develop what they would consider a conservative policy option to deal with it,” he says.

“The vast majority of the elected office holders are not even at the point of recognising that the problem is real and that we need to have a solution. That is not a tenable position long term, in its like, as with gay marriage and immigration, they’ll be on the wrong side of history.”